Though I’ve only been with The Fuller Center for Housing since June 6 of this year, I’m amazed at how many different people here at the Millard Fuller Legacy Build I already knew. 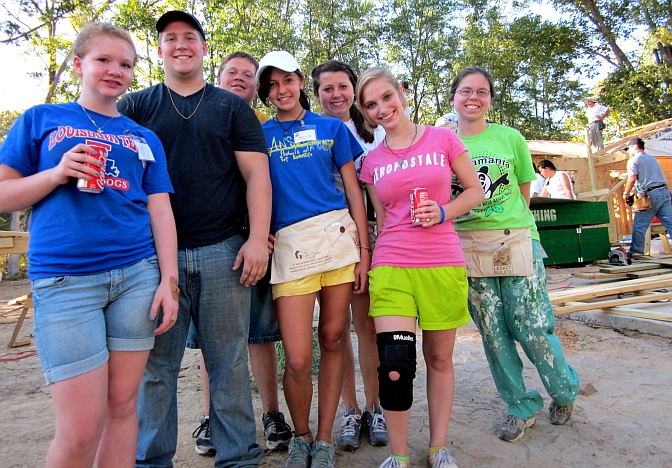 Granted, some of these folks were people I’ve only spoken with on the phone, such as Karen “Toolie” Warkentien of Virginia and Tamara Danel of the Ginger Ford Northshore Fuller Center in Hammond, La., who came up with her friend Ginger Williams, a delightfully positive Fuller Center homeowner who is truly paying it forward and is the kind of person who really makes you feel good about what you’re doing as a Fuller Center supporter or staffer.

Then there are other folks I’d actually had the pleasure of meeting in person during my short time as the Fuller Center’s director of communicatons, such as the impossible-not-to-like Charlie Park, the inspirational, radio-voiced leader of this build and the Webster Parish Fuller Center; or the quietly effective A.J. Jewell, who heads up the Central Florida Fuller Center around the Orlando area.

Of course, for people who’ve been associated with this movement from Millard Fuller’s days with Habitat through the Fuller Center era, the reunions take place with almost every step. It’ll be a while before I’m at that point.

However, on Monday I had an unexpected reunion with a group of kids from First United Methodist Church of Bossier City, La., which is less than a half-hour from here. I was taking pictures of a Greater Blessing project and thought the kids looked familiar. But I’m 41 now, and all kids look young and cute and energetic … unlike that tired old guy I see in the mirror every morning.

“Hey, are you that guy who took pictures of us at Koinonia?” one asked.

Ahh, that’s who these kids are! The Bossier City group spent a whole week of their summer vacation in June volunteering on a couple of Greater Blessing projects at Koinonia Farm near Americus, where this whole affordable housing movement was birthed.

Not only was I “that guy,” but that was also the very first story and photos I produced on my very first day on the job, though my predecessor Faith Fuller was still in my office and explaining such things to me as where the light switch was.

It was great to see that these normal kids who worked so hard during their summer break to be right back at it during part of their fall break. And great to see their energetic leader, Callie Dean, the youth director at the church.

As I look around me, the hugging and how’ve-you-beens have begun to subside as we’re in the middle of the workweek. And reunions will give way to goodbyes in a couple of days. Until the next reunion. And I’m looking forward to more of these reunions over the years.