At age 95, Dr. Robert H. Ayers has seen a lot of history. And as a religious scholar, writer and long-time professor at the University of Georgia, he is a beacon of spiritual enlightenment. So when a man of such stature donates $100,000 to The Fuller Center for Housing, it means more than the sum of its dollars.

“It makes us proud,” Fuller Center 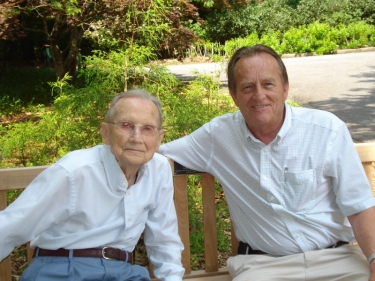 President David Snell said of the gift received last week during his visit to Ayers’ home in Athens, Ga. “He has a firm belief in God’s unsurpassable love. We feel like the work we do is an expression of God’s love. We’re sort of God’s hands and feet doing loving things. So, for him to share with us, he must think we’re doing the right things.”

Ayers’ understanding of The Fuller Center’s Christian housing ministry’s roots actually pre-dates founder Millard Fuller. His ties go back into the 1940s, when he met a radical Christian scholar named Clarence Jordan — founder of Koinonia Farm and the man who planted the seeds of Partnership Housing in Fuller’s heart.

“Ayers is 95 years old, and Clarence would have been 100 last year, so they’re actually peers,” Snell said. “They went through a lot of times together. Ayers began teaching at Georgia in 1949, and Koinonia started in 1942. He supported Clarence’s work and supported Koinonia Farm.”

Ayers recalls the first time he ever heard of Jordan. It was when Jordan was invited to speak at a Baptist summer assembly. He said the conservative leaders of the assembly obviously did not know whom they had invited.

“He was only on one session, and they would never invite him back,” Ayers said with a laugh. “The students loved him with his humor and his radical Christianity.”

Ayers recalled Jordan’s radical Christianity — although others would deem it true Christianity — when NAACP leader Sam Williams was trying to help two African-American girls enroll at Georgia State University. In an effort to try to skirt court-ordered desegregation, the Board of Regents was requiring every prospective student to have a letter of endorsement from a University System of Georgia alum — which was impossible for an African-American student to get.

Williams asked Ayers if he knew an alum who might be willing to sign for the girls. He directed Williams to Jordan, who drove to Atlanta for a meeting where he agreed to endorse them and sign their application.

“He was stopped by the state patrol twice on the way home, but he signed the application,” Ayers recalls — although the girls were threatened and were too frightened to actually attend classes.

Though he never met Millard Fuller, Ayers recalls visiting Jordan at Koinonia. He also recalls the racial tensions of the 1950s and 1960s there.

“The KKK was awful in those days, and Americus was a hotbed,” Ayers said. “It was the seat of awful stuff.”

Koinonia persevered, though, and the affordable housing movement sprang from the seeds Jordan planted near Americus, where The Fuller Center for Housing carries on the Christian, grass-roots vision Fuller honed based upon Biblical teachings. Because The Fuller Center is a grass-roots enterprise, Ayers knows his gift will be stretched to its fullest potential.

“The significance of gifts like this can’t be overestimated,” Snell said. “They make a tremendous difference in our ability to serve the covenant partners who are actually building houses around the world.”

Of course, just spending time with people like Ayers is gift enough.

“I tell you what — you meet people every now and then who just put a smile on your face,” Snell said. “He was a professor of religion for many, many years, but there’s nothing pious about him. He’s a down-to-earth guy. He’s very practical and has lived in the same house for 65 years. He’s a believer in hard work and hard thought and spends his time to this day studying to learn more about his chosen field. He’s a delightful guy. He’s funny, loves to laugh and loves to have a good time.”