To grasp the essence of The Fuller Center for Housing’s ReNew program, you need look no further than Louis Alexander.

Not only does the 51-year-old Louisville, Ky., resident live in a ReNew house he purchased from The Fuller Center for Housing of Louisville last year, but he also is a ReNew project in himself. 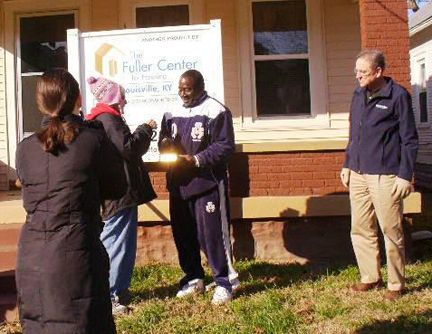 Though he says he was raised by a mother and father who were good “Baptist, church-going people” in Houston, Texas, he began to run with the wrong crowd. He staggered along a dark and winding road, going from city to city, finding only more potholes each time he hoped to find a fresh start. With alcohol as his top priority, the correct path was too blurry to follow.

“When you’re drinking and drugging for 20 or 30 years of your life, you get kind of left out of society,” said Alexander, who cites April 14, 2009, as the date he became sober once and for all after spending months in a Louisville treatment facility called The Healing Place. “But that was my choice, nobody else’s. I’d keep trying to blame everybody for my brother dying, my mother dying. I blamed a lot of different people, but I never looked at the part I played in it. And I made a lot of wrong decisions.

“But I put alcohol to everything that went wrong in my life,” he added. “I never really dealt with it sober. I kept running away from issues. But today I look life in the eyes, and I deal with it.”

The first step was getting sober and walking away from the bottle. Next was preparing himself for the workforce, which he did by participating in the Volunteers of America’s Life Skills program.

“I never missed a day or program that they had,” he said. “They teach you about living life over.”

While there, he learned about another organization in Louisville that could help him on his quest to be a productive member of society, The Fuller Center for Housing.

Grace Patterson, who chairs FCH Louisville’s Family Selection/Partnering Committee described Alexander as the kind of second-chance story that late Fuller Center for Housing founder Millard Fuller so loved, especially having been a bit of a second-chance story himself, having felt he went astray in his 20s chasing the almighty dollar.

“I asked God many times to give me another chance, and I’d backslide,” Alexander said. “So this is another chance in life to do the right thing. The house is wonderful. I told Ms. Grace that I thank God for them. I asked God to give me what I need, not what I want. And that’s my prayer today. And I always ask Him to put me around positive people and things in my life like Ms. Grace and that organization.”

Louis Alexander wasn’t the only one getting a second chance. The home itself got a second chance, which is the essence of The Fuller Center for Housing’s new "Save a House/Make a Home" initiative, which will fix up foreclosed and vacant homes, filling them with decent homeowners and families. Alexander’s home was one of two Boston Court properties donated by an investor who wanted nothing more to do with a street that had become undesirable. At least, it was undesirable before FCH Louisville began to transform the neighborhood.

"We have made a huge difference," Patterson said.

Paulette Sublett runs the Louisville YMCA’s Chestnut Street Supportive Housing program, which offers 41 rooms of transitional housing for homeless men. She said while obtaining decent housing for the sake of having a permanent address for job searches and business transactions is important, there are other, more far-reaching benefits to home ownership for those seeking to turn their lives around. 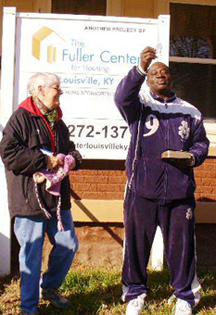 “One of the most valuable things is self-esteem,” she said. “Self-esteem is huge in that journey to self-sufficiency, being able to get back on your feet and seeing yourself as a productive part of society.”

She stresses that message to the men at Chestnut Street, where they help “residents with moving on to the next step – self-sufficiency. We do that through case management, workshops and goal-building.” With obtaining housing being such a critical aspect of self-sufficiency, she started a workshop called “From Homeless to Home Ownership.” On Feb. 21, she had Alexander talk to the men about his journey from homeless alcoholic to productive Fuller Center homeowner.

“He was a recognizable face to our residents,” Sublett said. “It was like he was one of their own. It’s one thing for me to stand up in front of them and tell them something. But it’s another thing for somebody who’s been there and done that to tell them and say, ‘If I did it, so can you.’ That’s very powerful. That’s extremely powerful.

“He tells the truth about what he’s been through and the bad decisions he had made and how far he came from those decisions. He didn’t hide anything. He didn’t act like ‘Oh, no, I never did any of those things you’re doing right now.’ So that was very moving.”

Alexander says his straightforward approach to telling his story comes from having had to be honest with himself, something that was insisted upon during his 10-month stay at The Healing Place.

“They make you really look at yourself and how you’ve got consequences from all your actions,” he said. “I’d never really cared about my consequences from penitentiary to jailhouses, even asylums. I’m just honest and say how alcohol and drugs took control of my life.”

After getting honest with himself, he managed to get a job, a house and then he was able to address the biggest consequence of his actions – estrangement from his son, a 30-year-old soldier who recently returned from serving in Iraq and is now stationed at Fort Bliss, Texas.

“I was never there for my son because I drank so much,” he said. “It took me away from being a real father. But today I can say my son is back in my life. He just came back from Iraq, and we’ve started a new relationship together. I think we’re closer today than we were a long time ago. He always loved me, but I never did love myself.”

‘A LIFETIME CONTRACT WITH ME’

While having a decent home, a permanent address, a job, soberness and a restored relationship are all reason enough for Alexander to gush as he does with gratefulness, it was his reaction to something else that is forever etched in Patterson’s mind as a small-but-telling example of appreciation. 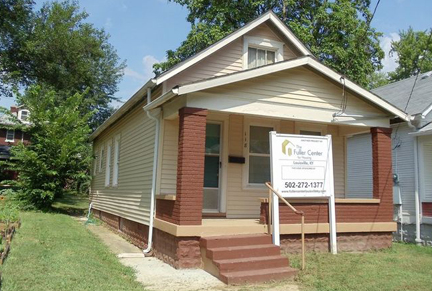 “Linda Moorehead (FCH Louisville volunteer coordinator) and I met Louis to show him the house for the first time,” she recalls. “He was beaming and got so excited when he saw the bathtub. He said it had been a long time since he took a bath. We take a lot for granted. But he said as a homeless person, the one luxury you never get is a bath. The shelters all have showers but no bathtub. It’s something we don’t think about.”

She said she apologized for not yet having a shower curtain for his bathroom, but he insisted that wasn’t a problem.

“He said it would be a long time before he took a shower.”

While talking about his home, Alexander interrupted the interview for a moment to wave and yell, “Hey, neighbor!” to a person passing by his Boston Court home.

“This is a true blessing,” he said. “I never thought I would be a homeowner at the age of 50 with the lifestyle that I’d been living.”

Though he is recovering from rotator cuff surgery right now, he’s eager to get back to work with Grandmaster and volunteering to help FCH Louisville.

“I’ll give all my life and time for them,” Alexander said. “They are a wonderful organization. I thank God for them. They’ve got a lifetime contract with me. Whatever they want me to do, I’m willing to do with no hesitation.”