We started this week with Memorial Day and are capping it off tomorrow, June 1, with the dedication of four homes for once homeless veterans as the 2013 Veterans Build wraps up in Shreveport. For Lee Jeter, who leads The Fuller Center of Northwest Louisiana and also is a Marine Corps veteran, it's hard to contain his excitement about tomorrow's event. 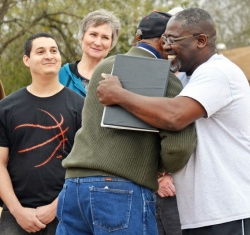 “We expect tomorrow to be like the Fourth of July on the first of June because it's going to be an all-American day with flags lining the strip,” Jeter told me today. “And it's appropriate that we just celebrated Memorial Day on Monday because now we're going to have a chance to honor these veterans who all served their country and really show how much we appreciate the sacrifices they made on behalf of a grateful nation.”

The homes were paid for primarily with a $300,000 donation by Pink Floyd legend Roger Waters through the Bob Woodruff Foundation. A total of 496 volunteers spent more than 4,600 hours working on the homes, including another music superstar, Grammy-winner John Mayer.

For Lee, it's the culmination of a four-home build but also the springboard for an 11-home Veterans Village that will be within walking distance of the local VA facility.

“I feel very, very positive that because of the success of this project, the amount of volunteers that came out to support the project and the fact that we did everything we said we were going to do, I feel like a potential sponsor will step up and help us fund the rest of the village,” Lee said. “For us, that's another seven houses.”

All they need are some sponsors to step up.

“We're going to start as soon as we get the money,” Lee said. “Our motto has always been and will continue to be that as soon as we get enough money to build a house, then we will build a house. If somebody gives us enough money to do seven houses, then we'll go ahead and build all seven houses. The only thing that can stop us from doing it is funds. We won't start a project until we've got the full amount of money to finish a project. We've proven that once we start a project and have the funds to finish a project that we can get the project done in record time.”

In the two years I've been with The Fuller Center, I've found Lee to be a straight-talker (what else would you expect from a Marine?) who simply gets things done. He's a good-hearted guy and a passionate speaker about the work of The Fuller Center.

We deal with all kinds of folks all over the world. And it takes people like those 496 volunteers, leaders like Lee Jeter and generous sponsors like Roger Waters … and YOU to make it possible. Not everyone can part with $300,000 or spend a week working on a house. But everyone could spare some money and some time — especially if it's for veterans like these four men who've given so much to their country. They didn't want a handout, just a hand up. With your help, that's what we're able to provide now … and in the future.

Click here to donate to The Fuller Center for Housing.