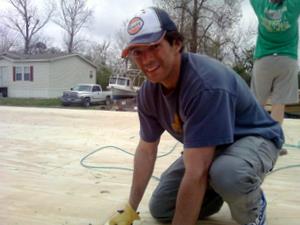 Greetings from New Orleans! I’m here taking part in a very exciting build for "Mama Black" whose home was completely destroyed by Hurricane Katrina. We’re actually building her home in a suburb of New Orleans called Belle Chasse. It’s so exciting to see her home finally coming together after all these years of struggle and hardship.

Something fun happened this week while our group was in New Orleans. We were out for a meal at a great restaurant called Copeland’s Cheesecake Bistro located in the heart of the historic district. Not only did we get a great meal, we got a volunteer!


Our waiter, Stephen Sclafani, noticed the Fuller Center 5th anniversary shirts some of us were wearing. When Tamara Danel, Vice President of the Northshore Fuller Center for Housing, explained we were building a house in nearby Belle Chasse and introduced me as the co-founder of Habitat for Humanity and the Fuller Center for Housing, he responded, “I’ve heard of that good work but I have never helped build a house.” Of course, I perked up. “We are short one volunteer for tomorrow because we are getting ready to put up walls.” “Well,” he responded, “tomorrow is my day off. I would like to come.”

The next day, the five of us were wondering if Stephen would actually show up. Sure enough he did! And, what a blessing he was because we were moving pre-assembled sections of walls onto the raised sub-floor and we needed a little extra "muscle power." Stephen went right to work and stayed the entire work day…even going with us to Mama Black’s for lunch for some delicious homemade jambalaya. One of her daughters, Betty Ann — who was with us at the restaurant the evening before — had a great time serving Stephen whereas he had served her the evening before.

Stephen told me before leaving how much he enjoyed the day and that he looked forward to doing it again.

And this is why I love this work! It’s incredible to see people from different walks of life come together for a common purpose — changing the life not only of the homeowner, but also of the volunteers.

See more pictures of Stephen and the other volunteers working in Belle Chase here.

And check out all the other great videos, photos and stories coming out of the three 5th Anniversary Build sites.