When Fuller Center for Housing in the New Jersey Pines Executive Director was one of the first disaster responders on the ground in Atlantic City after Superstorm Sandy struck in October, he simply wanted to do something to help and hoped that someday the community would follow in his footsteps and create a Fuller Center covenant partner of its own for the long run.

When Fuller Center for Housing President David Snell began packing for this week’s Millard Fuller Legacy Build, he hoped that the work of The Fuller Center and its volunteers would restore trust among Atlantic City residents who have fallen between the cracks of other recovery efforts.

With just one day left in the Legacy Build, it appears both men could be getting their wishes.
Fuller Center Director of Communications sat down with a physically weary but emotionally upbeat Fuller Center for Housing President David Snell for a quick question-and-answer session about events this week in Atlantic City. 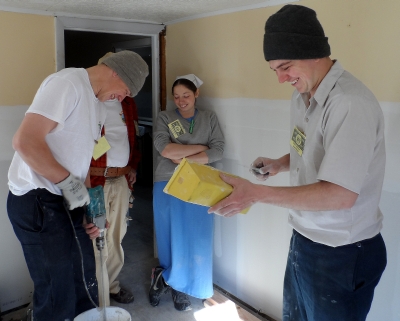 We wanted to rebuild trust as well as homes here in Atlantic City. How are we doing?
We are doing a good job. It’s interesting being in the neighborhood and watching the neighbors. I don’t know if we had a thing to do with it, but the folks down the street and the folks next door are both painting their houses this week. And I’m getting smiles. If I happen to mention what we’re up to, I hear, “Oh thank you for coming to Atlantic City!” I’m not experiencing anything but gratefulness for our being here and hopefully that will encourage other people to come forward and take advantage of the great blessings we have to offer.

So positivity is contagious?
I think positivity is very contagious. Negativity is, as well. Sometimes people get wrapped up in the negative side of things and need to be jolted into seeing thing in another way, a positive way. Many of the six-month anniversary stories in the media seemed to reflect some negativity here, but I think the positivity that we’ve witnessed here — and brought with us, as well, in the form of unselfish, giving volunteers from across the nation including dozens from New Jersey —will be contagious.

The Fuller Center for Housing in the New Jersey Pines, the hosts of the Legacy Build, really had to rush to put this together in a short period of time and had to jump through a lot of hoops and overcome a lot of obstacles. Rate the job that Neil and Merle Brown have done, along with their board and partners.
A project like this is defined by the crises that come up one after the other. It’s a big deal. I was asking our volunteers the other day before we began work, “How many of you have had 250 people over for lunch?” Well, they’ve got 250 that they’re serving three meals a day to, and housing and lodging and moving and 20 houses that they’re stocking and organizing. They’ve done an amazing job. There’s always problems and glitches, but we’ve overcome them. In our house, we’ve never stopped, which I think is a credit to our house leader who is somewhat of a tyrant. (Laughs) I was looking forward to a break and never got it! So they’ve done a great job. This thing has legs. 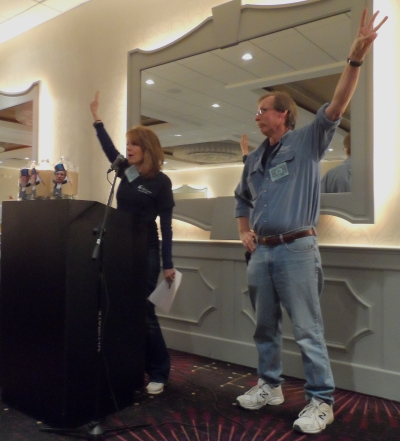 Speaking of having legs, wouldn’t it be great for a local Fuller Center covenant partner to form in Atlantic City?
Well, that is the goal. The goal is to have a covenant partner right here in town. Merle and Neil and most of their board members live 50 to 60 miles away from here over in Tabernacle, N.J., and that’s really their base of operations. Neil was the first guy on the ground in Atlantic City looking to rebuild after the storm. They committed to getting things started. They wanted to help get it started and help organize a local covenant partner to finish things. We believe that local control and management is the best way to get things done. That’s why all of our covenant partners across the nation are run by local folks.

We’ve got some local folks here that are very interested in forming their own covenant partner in Atlantic City. We believe that decisions need to be made locally. They need to be made in the community that’s being served. Even though Tabernacle’s not that far away, it’s not Atlantic City. We’re going to be working real hard with Neil and Merle and their group to find and recruit some folks to set up a covenant partner.

If the community owns it, more gets done. It’s not somebody coming in, it’s them taking care of their own. That’s the goal. After a disaster, people are shellshocked. And with what happened here in Atlantic City with the whole town affected by it, the whole community was shellshocked. You don’t just all of the sudden jump up and say, “OK! Let’s organize a new organization to put things together!” But they’re ready now. It’s been six months since the storm hit. The time has come now. They are ready to take local control and guarantee success in their future.