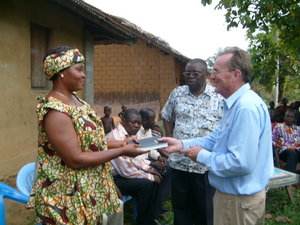 Watch footage below of David in the Congos!

While visiting, David celebrated with the villagers as they dedicated 10 houses–six in the Fuller Center for Housing Bolomba-Likolo, located in the DRC and four across the river in Makana with the Fuller Center Republic of Congo.

“I was able to see how the efforts of the local Fuller Center there are really beginning to take off and may quickly become an important part of our international work,” David said.

He met with government officials and potential partners to discuss how to move forward on initiatives to build not just houses, but a community that can itself sustain growth. One promising possibility includes reestablishing the sales of coffee and palm products and beginning the sales of corn, as a way to create jobs. 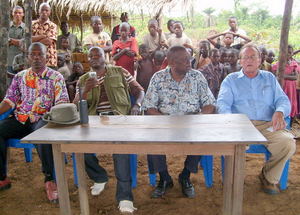 The Democratic Republic of Congo is the land where Fuller Center founders Millard and Linda Fuller first tried out their ideas for a housing ministry. At the time, in 1973, the area was known as Zaire.

As a result of years of struggle, the Congos are some of the poorest countries in the world. Housing need is high. A visit like David’s helps spread ideas of self-help and a philosophy of giving that is uncommon and appealing to the government and villagers there.

Visit Snell’s blog post here describing the first half of the journey to a land where outside visitors are few and far between, and check back soon for a follow-up post.

You can read more about the Fuller Center in the DRC here and the Republic of Congo here.