The Fuller Center announced on Nov. 17 that Henry County had been selected to host the Legacy Build. Less than a week later, the dates for the U.S. portion of the Build were set for Sept. 9-14, 2012. A hub also was added for the international portion of the Build, and that will take place the previous week, Sept. 2-7 in Peru. 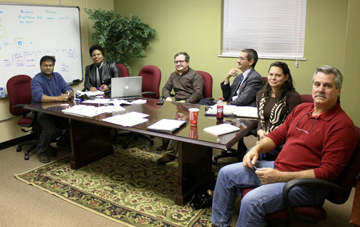 With the host and dates set, Fuller Center officials in Henry County and at FCH headquarters have set about taking care of the many details, big and small, involved with such a massive project. And it has been decided that next year’s build will look a little different from the first three Legacy Build.

The 2012 Build will boast a heavy green theme. Henry County President Shane Persaud is not just a brilliant architect, but also he has a passion for energy efficiency and green building. The new home will be EarthCraft-certified, and it is hoped EarthCraft certification can be achieved on one or more ReNew projects, as well. (To learn more about EarthCraft, which originated in the metro Atlanta area, click here.)

Lyman-Barner noted plans are preliminary but that organizers are going full-throttle ahead with the challenge.

Click here for more information about the Henry County Fuller Center for Housing.