Some of you are aware that we’ve been dealing with a serious technical issue for the four houses underway–the pilings at two of the four homes were cut short. One house was two feet below ABFE (advisory base flood elevation) and the second was one foot short. The surveyor revealed this when the second house was very far along in trim-out. 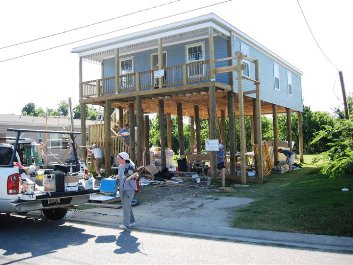 The two-foot short house was relatively straight forward–we just built a second deck on the house two-feet above the first one. For the second house we were going to have to use a house mover, etc. Very complex technical solution. I held off reporting this until we had a clear solution.

Well, last night our prayers were answered! We were notified that the funds grantor will not require us to raise the house (would have cost at least $35K). Praise God from whom all blessings flow!

More news–we’re dedicating Pamela Williams’ house today. It looks beautiful! The list of names that have made this dedication possible is long but certainly Doug Brushaber, Craig Ballenger and the famous Overholt team of John and Robin are at the top of the list.

Final news flash! We’ll be completing operations here in Plaquemines in July. We don’t know our next call but we’re in conversation with folks in Tuscaloosa and, as I always hedge, hurricane season began June 1st.