Wow! Talk about bringing a big name into the Fuller Center for Housing fold. It’s been confirmed that this weekend’s Bicycle Adventure celebration in Kansas City will include the Pope. Hang on just a sec; a colleague needs me. (“Huh? Not THE Pope? Oh.”) 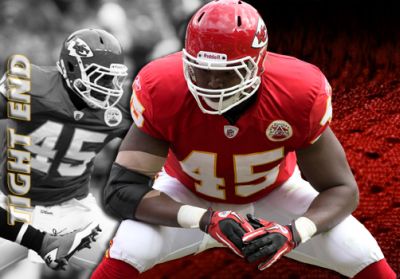 Oopsies. I’ve just been told it’s not THE Pope but A Pope who’s coming, Kansas City Chiefs tight end Leonard Pope. I guess that makes more sense. I thought Pope Benedict was a little slow to play tight end in the NFL. Guess I’ll scratch him from my fantasy football draft list.

Yesterday, we mentioned a big star was coming to Minden, Louisiana, for our Millard Fuller Legacy Build in October. No offense to HGTV’s Kimberly Lacy, but today I’m talking about a really big star – as in a 6-foot-8, 264-pound star.

I remember seeing Leonard play high school ball at Americus High School, back when he was still 6-foot-8 but likely way less than 264 pounds. He played tight end AND free safety for a darn good Panthers team that won back-to-back state titles in 2000 and 2001. He also went on to play for my beloved Georgia Bulldogs and helped them win an SEC Championship in 2005. (On behalf of Bulldawg Nation, thanks, Leonard! Ruff! Ruff! Ruff!)

I chatted with Leonard a few moments ago. With the NFL and its players on the cusp of an agreement that will soon end its long lockout, he is about to hit the football field again soon. But not before doing a little more work with the Fuller Center, with whom he serves as honorary chairman of our Bicycle Adventure.

“I’m very excited,” Leonard said of the nearly complete labor deal between NFL owners and players. "Hopefully everything I’ve been hearing on radio and TV about it is accurate.”

For now, though, he’s on the Fuller Center team. And unlike the Chiefs, we have a standing policy that 6-foot-8, 264-pound volunteers get to play any position they want to.

“It’s been a long time since I’ve built anything,” said Leonard, who said he intends to swing a hammer at Saturday’s build. “I might need to get my hands on a drill, too.”

Somehow, I doubt that will be a problem.

For those who don’t know, Leonard’s connections with the Fuller Center go beyond the coincidence that he played his high school ball at Americus High School, just a few miles from our headquarters. Leonard actually grew up at Koinonia Farm, the Christian community that gave birth to the affordable housing movement led by Millard Fuller and wife Linda, who founded Habitat for Humanity and the Fuller Center for Housing.

“My father’s side of the family has had a long history with the Fuller family, and I’m just trying to continue the tradition.”

Thanks for all the help, Leonard. By the way, he’s a true hero, having saved the life of a 6-year-old who nearly drowned in an Americus pool back in June. Watch an NFL Total Access story about it here.