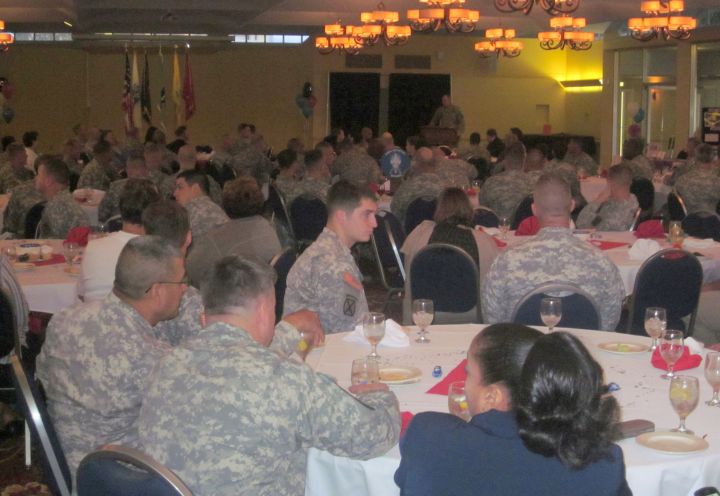 Director of U.S. Field Operations Kirk Lyman-Barner and I traveled to the nearby Army post of Fort Benning today as officers and leaders were encouraged by Fort Benning commander Maj. Gen. Robert Brown and others to drum up donations for many worthy causes supported by the Combined Federal Campaign, started 50 years ago by President Kennedy.

In our first year as an eligible nonprofit in the CFC ranks, we want to make sure we let as many people as possible know about our work. Since Fort Benning is full of a bunch of doers, we made sure to inform them that our partner families don’t sit idly by while we hand out new houses and Greater Blessing repair jobs. These seem like the kind of folks who would appreciate that our partner families work alongside our volunteers and participate fully in the building process. Trust me, the whole "hand up, not a handout" thing resonates with our hard-working soldiers.

While we’d like for every federal worker who contributes to the CFC to select The Fuller Center as a designated recipient of their donation, we know that there are many other worthy causes out there, including a couple dozen represented Wednesday at Fort Benning. But for those concerned about poverty housing and its impacts on families worldwide, we want to make sure our work is known. The good thing about a place like Benning with thousands of young, healthy soldiers is that even if they don’t check No. 32458 on their CFC list, they are still one heck of a pool of potential volunteers.

In addition to meeting the current commanding general of Fort Benning, we got to meet an ex-commanding general of the post, retired Maj. Gen. Kennth Leuer. Leuer’s display was next to ours. He heads up the National Ranger Memorial Foundation. In addition to operating and maintaining the Ranger Memorial, the foundation has an endowment fund to promote educational scholarships and assistance for Rangers’ families. 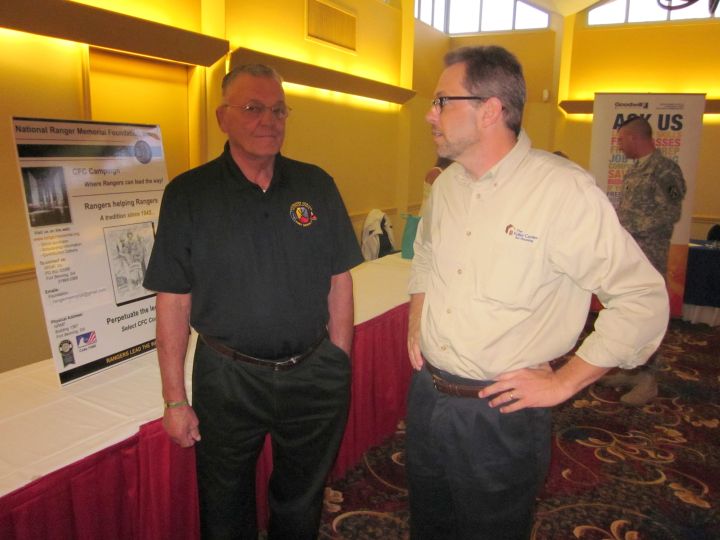 The only transaction set in stone during the day was between me and the Ranger Memorial. My grandfather was a member of the World War II unit that would become known as "Darby’s Rangers" — the original Army Rangers. So I’ll likely pool some family members’ money to buy an engraved brick in his name at the memorial. My grandfather, Frederick Murph Dixon, lost both of his legs when hit by German machine gun fire in Tunisia in 1943.

According to an account in the Washington Post, he carried a severed leg in one arm while firing his gun with the other. A German doctor would actually save his life. My grandfather was a bit of a spiteful man, though. He was quoted as saying, "If I’d have been conscious, I’d have killed him, too." When he returned to the States, he sang on a radio show in Washington, D.C., to help raise money for war bonds. (Before the war, he was in the band of country music star Cowboy Copas, who died in the plane crash with Patsy Cline.) We have a photo of my grandfather with then-first lady Eleanor Roosevelt, thanking him for his continued service.

My very first trip to Columbus was about age 9 for an Army reunion at which we met the two soldiers who loaded my wounded grandfather onto a truck. Apparently, they had debated whether to leave him for dead and continue ahead with their unit or pick up my grandfather and take him back to base, thus losing touch with their unit. They said my grandfather helped them decide with a statement along the lines of "Y’all better put my %$#@! on that %^$#@! truck."

I’m glad we got to return to the scene of a vivid childhood memory, and I’m also glad we got a chance to visit with the soldiers who are having to face similar intense circumstances in places like Afghanistan and Iraq. It feels a little strange to ask those who give so much of themselves to give more. But it’s reassuring to see that those who do give so much only long to give more. And we are very thankful for all they give.