In 2007, Zenon S. Colque, who founded Habitat for Humanity Peru in 1982 and led it until 1992, heard about The Fuller Center for Housing. In early 2008, still very much concerned about the housing needs of his fellow Peruvians, he visited The Fuller Center for Housing in Americus. Upon his return to Peru, Zenon set about incorporating a new Fuller Center and embarking on the La Florida project, which will build over 500 houses in the province of Cañete, south of Lima.

La Florida regularly hosts teams of volunteers. Opportunities are available for skilled and unskilled builders, and speaking Spanish is not required to participate. Outstanding pre-Colombian historical sites, varied climate and topography, and a rich mix of cultural traditions make Peru one of the most fascinating countries in the world to visit. Propose a trip now or learn more about joining a trip on our Global Builders page.

BACKGROUND
Peru is located in western South America, bordering the South Pacific Ocean, between Chile and Ecuador. Ancient Peru was the seat of several prominent Andean civilizations, most notably that of the Incas, whose empire was captured by the Spanish conquistadors in 1533. Peru declared independence in 1821 and defeated remaining Spanish forces in 1824. After years of military rule, Peru returned to democratic leadership in 1980. The presidential election of 2006 saw the return of Alan Garcia to the presidency with promises to improve social conditions and maintain fiscal responsibility. Currently, of the population of 29,180,900, 44 percent live below the poverty line and over 70 percent of the rural population live in homes with dirt floors.

The Peruvian coastline south of Lima, where the first Fuller Center for Housing project began, is some of the most arid land on earth, receiving little or no rainfall. Agriculture is maintained through a system of irrigation canals that bring water from the higher elevations of the Andes or from artesian wells sunk below the desert. As this coastline was once seabed it is extremely fertile and with proper irrigation can produce crops for domestic use and export. 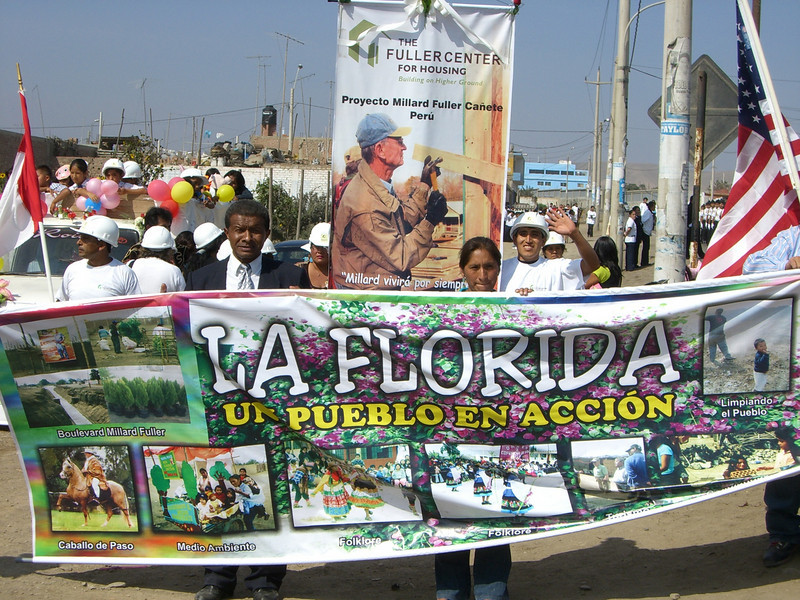 PLANS
At the beginning of 2015, 56 homes had been completed. The houses are approximately 60 square meters (647 square feet), made of purchased bricks and are anti-seismic, as required by Peruvian law. The project helps families build on their own land. For many of these families, their Fuller Center home is the first permanent dwelling they have ever lived in and owned. These families cannot obtain normal credit opportunities because of their low incomes and lack of collateral. Families will perform sweat equity and sign a low-cost, no-interest mortgage with The Fuller Center.

Most of the families with whom The Fuller Center will build are migrant workers or day laborers. In a desperate search for work, they came to this area from other parts of Peru, particularly the Andes. Unable to earn enough for decent homes, they live in structures made of reed panels among the sand dunes in the region. These houses are flimsy and lack privacy, and few have access to basic human services. Only about 10 percent of the dwellings in the area can be considered permanent.

GOALS
By the beginning of 2015, 56 houses had been completed and five more were under construction. In addition to home construction, the Fuller Center Peru is developing the landsape in La Florida, helping to plant over 500 trees.