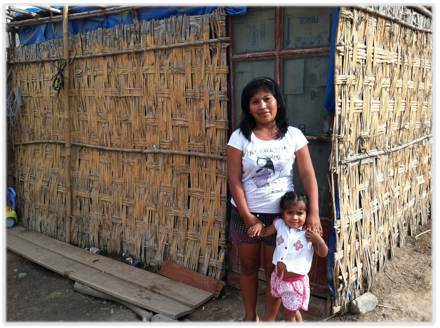 Emanuel Yaro Yactayo, 25, and Milagros Arias López, 24, live in a small one-room house with their 3 year old daughter, Lizzy Fabiana Yaro López. The small one-room, which they call home is built of sticks, plastic, and animal manure. The condition is so poor that they have a hard time keeping warm at night or ever feeling secure in their own home. Both Emanuel and Milagros are migrant workers in the near by fields and work hard to provide for what they do have. Come September they are looking forward to finally having a comfortable and secure place to raise their daughter. 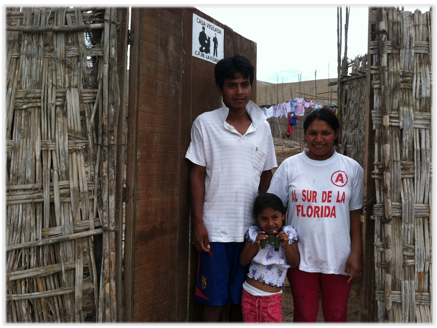 Gerardo and Geraldine are a young family but have big dreams for the future. Five years ago they were able to purchase land and slowly were able to build a home with 2 rooms and even a small kitchen. The home is made completely of sticks, plastic, and animal manure. Even through they see how far they have come they still dream that one day they will walk into a house which is safe and secure for their family. Being selected for the 2012 Millard Fuller Legacy Build has showed them that their dreams will finally become reality and they have faith that their lives will totally change for the better. 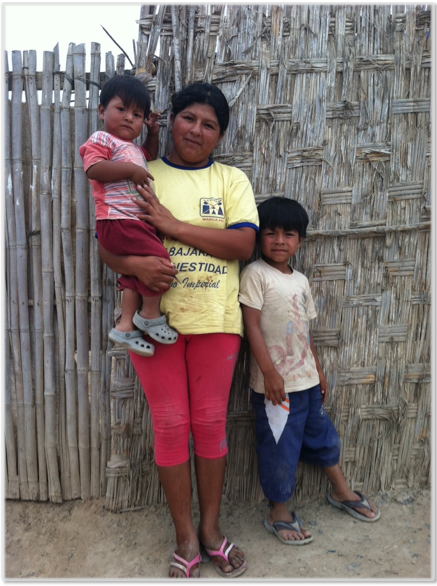 The family of José and Miriam, is a young family, now living in a 2 room house built of bamboo sticks. The walls are lined with plastic, the floors are made with dirt and the roof is matted with plastic wrap and topped with donkey manure. Neither José or Miriam have ever lived in a house made of bricks because their parents were both very poor. They look forward to changing this for their sons and providing a better quality of life for both Leonardo and Dayron. Miriam is excited for the opportunity this September to personally work alongside all of the volunteers and to thank each and everyone who made this dream even possible. 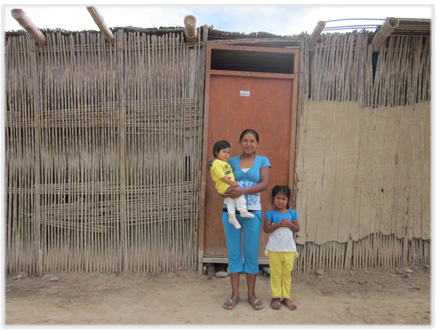 The Centeno family lives in a typical house for La Florida; a home made of bamboo sticks, plastic, and animal manure. Luis and Yesin are both hard workers, working in the near by field and chicken farm. Even with working long hours they still however lack the needed funds to have a permanent home. Now two years later that dream is coming true. Yesin is still in shock that her family has been approved for construction. Many days she just does not believe it. One thing Yesin says she looks forward to is walking into her new home and creating new dreams because now she sees that dreams can truly become reality. 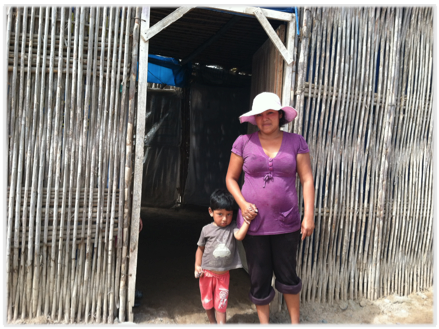 Katherine is a single mother of Josué and works hard to provide for the basic needs of her son. Their home is a typical home in La Florida made of sticks, plastic, and animal manure. During the day Katherine’s mother cares for Josué so she can go to work Katherine is a clerk at the Municipality in La Florida. When she found out she was selected to be a homeowner she was excited and proclaimed that God had heard her cries! 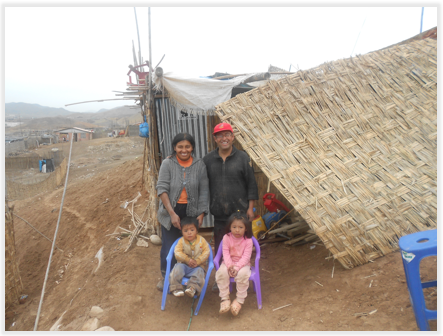 Eliud (E.T. as Zenon likes to call him) and Elizabeth moved to La Florida one year ago because they found the mountain climate of Yauyos too hard for raising their two children. The family lives in a one-room house constructed of bamboo and plastic. Additionally, the house has dirt floors and they share one bed. Eliud has been a school teacher for over twenty years and currently teaches math and science at a secondary school in Yauyos. He stays there during the week and takes the four-hour bus ride home for the weekends. Their future home will sit atop a nearby hill providing great views of La Florida and the surrounding landscape. Eliud says he did not choose the site for its views, but rather for its cool breeze that will be especially pleasant in the summers. Eliud and Elizabeth are very exicted for September when they will finally have a permanent and comfortable place to raise their children. 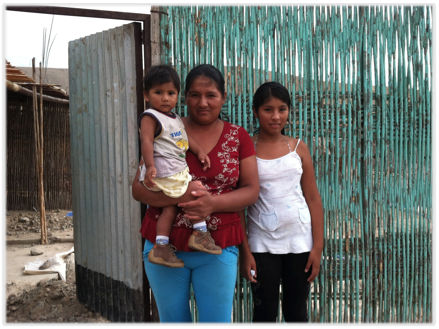 The García family have two children; Danitza (12) and Brayan (2). For many years the family has lived with Juan parents in a single room hut. The living condition was very poor with so many people in such a small area that they decided they needed to move. Juan and Elizabeth were able to save up enough money to purchase their own land but not to build a home. They put together what they could to make ends meet but they look forward something perment where Elizabeth can care for her own children, as well as other. Elizabeth is a childcare provider in the La Florida commuity. Since Juan is away most of the time working at a chicken farm he is relieved that his family will finally have a safe place to live. Both are exicted and confident that come September the whole family will have a better quality of life. 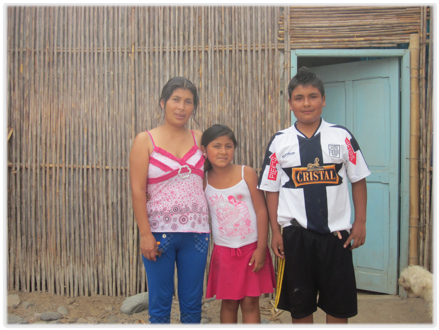 The family of Augusto, 36, and Juliana, 32 with their two children Brian, 13, and Janice, 9 moved around a lot before they could purchase their own land and build their own house. The only thing was that the household expenditures were too high for this to completely happen. Some days they could barely provide food let alone to save money to build a brick house. So they used what they had and built a home of sticks lined with plastic. Now that their children are bigger they realize the instability they live with each day. They dream of a safer place where they can feel stable and secure. Now that dream is coming true and come September it will be reality! 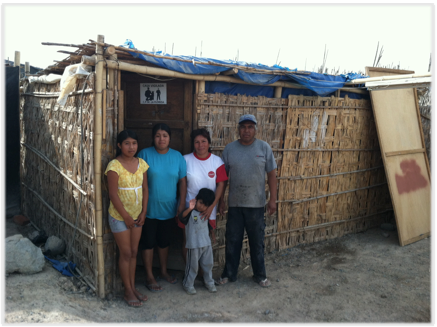 Alberto and Candelaria are a hard working family who has given back to the community in many ways. Alberto works in construction while Candelaria works in the near by fields. In addition, the family has their own little farm at the back of their house where they raise house birds, chickens, and guinea pigs. Their house was built with the little savings they had gathered to purchase sticks and to line the inside with mats and plastic bags to protect from the cold at night. The house has three divisions: two bedrooms and one kitchen. For many years they have doubted the ability to have a safe and secure home, but now after many years of hard work and waiting they will now have a safe place to call home! 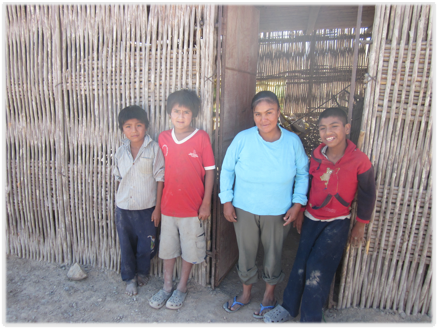 Domitilda is a single mother, with three sons Juan 14, 11 year old Luis Ángel and Héctor 8 years. Her life has been very difficult. After her husband stopped providing for her and the children she had to do something. So one day she decided to pick up and move her children to La Florida where an uncle took them in and offered them their support. Domitilda’s uncle allowed for them to live with him until she was able to make it on her own. Of course, it was hard parting with her husband but she knew she had to provide for her children. So after moving to La Florida she went to work in the neighboring farm in order to feed her children.

Domitilda says, “My situation is very hard, but not impossible. I am a father and mother for my children.” Now that her oldest son is 14 years he is able to work in the fields as well. So during his school holidays both Juan and Domitilda go to the farm to work. Between the two, they are able to gather more money and save for college expenses.

With great effort Domitilda has moved out of her uncle’s.  Together with her neighbors and uncle was able to build a house made of reeds. The small one room house has a little floor mat where her and her children sleep. All four of them sleep on the little mat. In addition, to the floor mat she is proud of her water jug and a large pile of firewood. She has to keep her firewood inside because if she leaves them out it may be taken. She is always afraid because she has no financial resources to fence in her land to add protection for her family. She desires so much to change her and her family’s life.  The living condition is so poor that the house has no running water, electricity, or sewage and because the walls are made of sticks the house is always full of dust and cold at night.

When Domitilda was told about her house she smiled from ear to ear, thanking God that she met The Fuller Center. She was so excited that she had a hard time speaking. After a little while she was able to compose herself and share how grateful she was and how excited she was that her dream of home ownership is finally coming true! “Now I can finally provide a warm, safe, and comfortable place for me and my family to live, I just cannot wait until September!” says Domitilda.