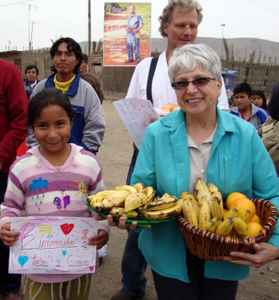 Seventeen sturdy, brick houses will be replacing bamboo huts in the desert of La Florida, Peru. Six of them are now ready for roofs thanks to the help of a Global Builders team that returned from a build there, July 14.

You can find pictures from the trip here.

The diverse team included a recent high school graduate, a trained clown and the Global Builders directors themselves, Jim and Margaret Favre. The team was led by Rob Beckham.

“It’s so much more fulfilling to be able to do this than to write a check,” Mays said. “It’s the people-to-people relationships that are important.”

Most of the homes in La Florida are built of woven bamboo walls and ceilings hammered straight into the dry, dusty ground. The only water near the rural desert town comes from a canal dug years ago. Residents must haul water back and forth with buckets and wheelbarrows.


The already impoverished La Florida took a large hit in 2007 when an earthquake ripped through town. Many people left the area, and those who stayed remained with almost nothing. 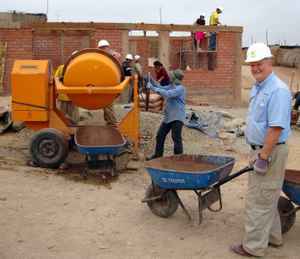 “We’re so used to having all this stuff,” Mays said. “And they have dirt. They are literally dirt poor.”

Owning a decent home elevates the standing and opportunities of a villager in his or her community. With shelter taken care of, residents can focus on things like education.

The 2,000 villagers of La Florida, located just two hours south of the capital city, Lima, lead lives that are mostly contained to their village where they farm. When the group of people from the United States arrived, the residents threw a party on main street and presented the build team with gifts of fruit baskets and colorful pictures drawn by the children.


“We were welcomed with gracious Peruvian hospitality, live music, dancing, and the start of many friendships.” Jim Favre said.

Thanks to the local Fuller Center covenant partner, Fuller Center Peru, and its director Zenon Colque Rojas, good things are happening for La Florida. Seventeen new decent houses have blossomed in the desert. The villagers continue to thank Millard Fuller for the work his ministry has accomplished. A life-sized poster of Millard Fuller is prominently displayed on Fuller Boulevard, the main street with the village’s canal.

Toward the end of the build,  as part of a city-wide fiesta with speeches, live music, and a parade, enthusiastic volunteers collaborated with Robert Dillehay, the professional clown, and put on a show for the La Florida residents.

And the Favres also delivered five soccer balls donated by the Global Futbol Initiative for the youth of La Florida. 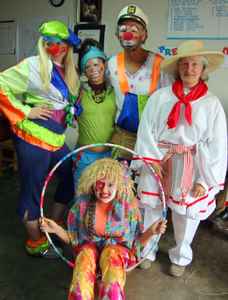 Another community involvement project in La Florida is the Tree Planting Project. While the most recent team was there, they donated and planted an additional ten trees to beautify Fuller Blvd. Individual local families volunteered to water and protect each of the ten new trees.

This inaugural Global Builders team trip to La Florida was a huge success, building both houses and relationships. But much more work remains to be done. The dream is to build 500 new houses in La Florida.

You can read a first-hand account of the people and work in La Florida here, written by volunteer Wendy Hearn. The next trip to Peru is Aug. 1-15, 2009. See the calendar of Global Builder events here. Learn more about Fuller Center Peru here.