Cyclists on the Fuller Center Bicycle Adventure have faced all sorts of obstacles during the 2012 Adventure, which will conclude Saturday in San Diego, Calif., after covering more than 4,000 miles on its West Coast and East Coast rides and a weeklong Spring Ride down the Natchez Trace.

There have been flat tires, extreme heat, sunburns, sore behinds, wrong turns, city traffic, steep hills and even a tropical storm. But none of the obstacles compares to those faced by four-time gold medalist Paralympian Tony Volpentest, who will work with the team on its final build day of 2012 on Friday, Aug. 10, in Oceanside, Calif.

It was a dream that took root early in his childhood, but it truly began to materialize at the age of 15 when he decided to join the track team at Edmonds-Woodway High School in Edmonds, Wash. He was guaranteed a spot because the team had a no-cut policy. And even though he finished last in nearly all of his early races, he still dreamed of being the fastest man on the track.

With the help of a teacher who steered Volpentest toward resources for disabled athletes, he became one of his team’s stars by his senior year and was turning in times near Paralympic world records. He would later achieve his dream of being 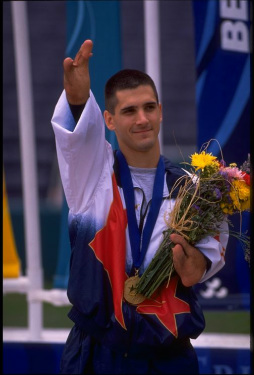 the fastest man on the track at the 1992 Paralympic Games in Barcelona as he won gold in both the 100 and 200 meters. He repeated the double-gold feat in 1996 in Atlanta, setting a world record of 11.36 seconds in the meters.

Volpentest now spends much of his time working with disabled children and injured military personnel. His autobiography, “Fastest Man in the World,” was released this summer by Bettie Youngs Books. Youngs also is the leader of The Fuller Center of San Diego.

Volpentest will work alongside cyclists as they repair two homes Friday with Fuller Center of San Diego homeowner partners and will appear later at a community meet and greet that begins at 6:30 PDT at Movin Shoes, a sports store at 897 S. Coast Highway in Encinitas, Calif. After Bicycle Adventure leader Allen Slabaugh and Fuller Center of San Diego representatives address the gathering, Volpentest will speak and then autograph copies of his book.

Watch Tony set the world record in the 100 meters at the 1996 Paralympic Games:

This remarkable “48 Hours” report about Tony aired just before the 1996 Paralympic Games: