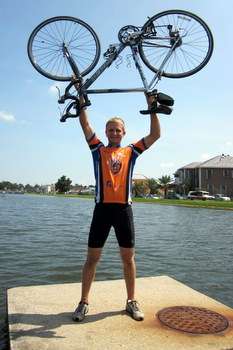 Well the Fuller Center Bike Adventure finally came to an end today for us all. It was once again another exciting and fun filled adventure in which we were able to spread the word about the issue of poverty housing and about the work of the Fuller Center. I want to say congratulations to all of the riders who participated and especially to the six who rode the whole way, that is quite an accomplishment.

Today started off with our last bike ride as a group. We were able to ride with a local group called the Crescent City Cyclists who gave us a great tour of New Orleans. We rode through the French Quarter, downtown, through the campus of Tulane, and a couple other places as well. At the end of the ride we pulled into a little park area across from Bayou Cycles where we had a great lunch and little ceremony with a bunch of friends from all over.

For lunch David Danel cooked us up some gator burgers. This was especially exciting for me because it’s the first time I’ve ever had gator and I was not let down–they were great. Then there was a little ceremony with Linda Fuller and David Snell there to honor all the cyclists with medals.

After lunch we had to say goodbye to our brother and sister combo from Maryland, Matt and Colleen McKenna. They were two great cyclists and even more amazing people; it was a real joy to have them on the trip. While down here in New Orleans, some of us were hoping to get a tour of the areas that were heavily affected by Hurricane Katrina and thanks to Mike Wilson, who stays at the Mennonite Disaster Service volunteer house that we were staying at, we were able to get a little glimpse of those areas. 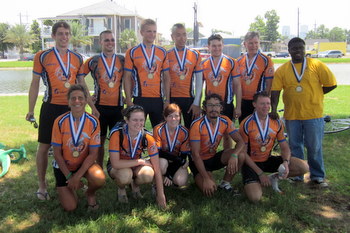 Our final hours of the Bike Adventure were capped off in true New Orleans fashion with a great benefit concert held at the Howling Wolf featuring some of the top local Jazz and Brass bands. I personally had a lot of fun getting to hang out with friends, listen to good music and just celebrate all the work that the Fuller Center has done around the world. Another great feature about the event was that all the ticket proceeds and also the proceeds from the silent auction items went to helping us get closer to our $250,000 goal.

Now as we pack up our stuff, say our goodbyes, and head back home we can all look back at the great memories and inspiring stories that we experienced over the last seven weeks. However, we must not forget that it won’t be long before the 2011 Bicycle Adventure begins. In 2011, we will be going into uncharted territory…view the route announcement below to find out where that will be: 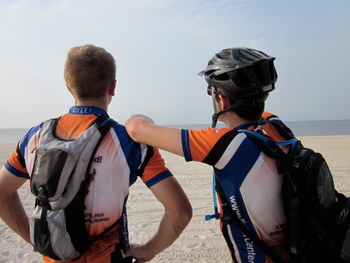 As many of you may know our great and fearless leader Ryan Iafigliola is stepping down from his role as trip leader so he can put even more focus on his year-round role as Director of International Field Operations, where he helps the Fuller Center to continue to grow in countries around the world. He is the founder of this amazing event and has done a remarkable job leading and organizing it the past three years.

But he handed over leadership of this event to me next year! I know I have big shoes to fill but I’m definitely excited and up for the challenge. Next year’s ride is going to be the biggest and most exciting adventure yet. So join me as we go great distances through beautiful countrysides, mountains, national parks and into areas that have yet to hear of the great work the Fuller Center for Housing is doing. It’s going to be the adventure of a lifetime so don’t miss out.

Allen met his fundraising goal. Hurrah! But he wants the team to meet theirs. Don’t let them down! Donate now.