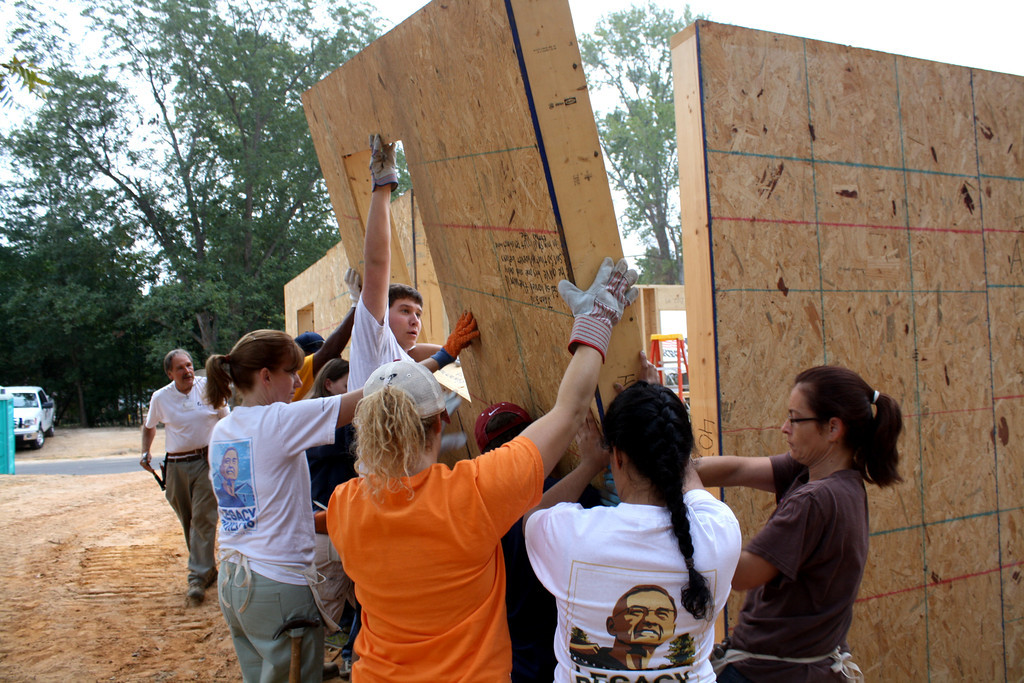 As I’m writing this, we are about one hour from dedications of the 15 homes built or repaired during the 2011 Millard Fuller Legacy Build. There have been shivers, sweat, hugs, laughs, tears, smiles, groans and cheers.

I pretty much expected all of that, but it’s all touching nonetheless. What was unexpected, however, was the gratitude. Well, the gratitude of homeowers and their families was certainly expected, but not the gratitude I just experienced about an hour ago.

I was walking back to our base camp under the tent when a man walking a neighborhood street approached me. He looked familiar, but I couldn’t place him and he wasn’t wearing the now very familiar Legacy Build nametag. He stepped into my path, stopped me and shook my hand.

“Thank you so much,” he said. “Thank God for y’all. What y’all are doing means so much to this neighborhood.”

I gave him a simple, “You’re very welcome.”

I was in a rush and did not have time for an extended conversation. There still are many more photos and videos to shoot this afternoon as we dedicate these homes to these wonderful families. But as I rushed back to the main tent, I struggled to place the face I’d just seen. Then it hit me. I’d briefly met him on the first day as I talked to his mother, 91-year-old Valine Lee.

This man who was so thankful for what was going on in his neighborhood wasn’t even a Fuller Center homeowner partner in this. The man who had a bounce in his step and a smile on his face with new hope for his neighborhood lives with his mother, who is not a Fuller Center homeowner, either, though she would like to become one. You can read about that here.

Yes, our mission is about helping deserving families obtain simple, decent, affordable housing. But it’s also about transforming communities, which I heard Fuller Center for Housing of Northwest Louisiana executive director Lee Jeter describe as something that happens “one house at a time.”

But I think it may happen faster than one house at a time. What’s happening here is contagious. We’ve been pitching this as helping 15 families. But looking around, I know that way more than 15 families in Minden, La., have been helped by the efforts of these volunteers and donors and supporters of the Fuller Center. An entire community has been transformed.

And having spent a week with Charlie Park of the Webster Parish Fuller Center, I know that even though this transformation is nothing short of amazing, it’s also just begun.