Be sure to watch our special videos of the groundbreaking ceremony at the bottom of the page.

The Fuller Center for Housing broke ground on an innovative housing project in the Democratic Peoples’ Republic of Korea on Nov. 11, 2009. This partnership with North Korea’s Paektusan Academy of Architecture will build 50 new homes in a self-sustaining community at Osan-Ri in the Sunan District near Pyongyang. The initiative will apply the latest in green building technology and will be a model for Fuller Center work throughout Korea and around the world.

There is a shortage of housing in North Korea caused in part by of Typhoon Ewiniar, which destroyed more than 30,000 houses in July 2006. This initiative seeks to help alleviate the overcrowded housing conditions that have resulted in parts of the country.

The Paektusan Academy of Architecture will help manage the project. Professionals from the United States and North Korea will work together to develop house plans that are energy efficient and environmentally sensitive in their construction and maintenance. 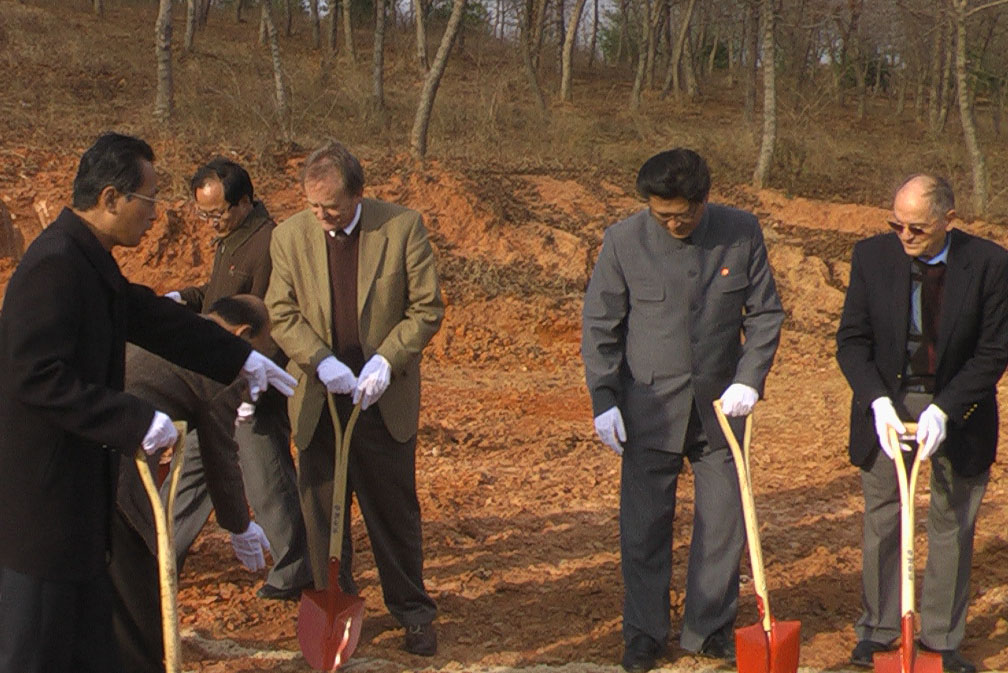 David Snell, the president of The Fuller Center, traveled to Pyongyang for the groundbreaking event with LeRoy Troyer, Fuller Center board chair; Don Mosley, the founder of Jubilee Partners; and Dr. Han Park, professor of political science at the University of Georgia and longtime advocate of improving relations between North Korea and the United States.

Beyond housing, this initiative offers an unprecedented opportunity for building trust and working toward peace. Volunteer teams from the United States and other countries will travel to North Korea to work side by side with Koreans to build the houses.

"This feature of the initiative is very compelling," said Snell. "We may not change international relations by this venture, but we will provide the opportunity for Koreans and Americans to come together for good and to get to know one another as fellow travelers and trusted friends."

This initiative was born from several years of conversations between Mosley and Professor Park about ways to create greater trust between Korea and the United States at the grassroots level. Park is the head of GLOBIS (UGA’s Center for the Study of Global Initiatives) and is a highly regarded liaison between the two countries. This project was among the last endorsed by Millard Fuller, founder of The Fuller Center for Housing and Habitat for Humanity, before his death in February 2009.

"We have been impressed with the sincerity of the Korean people we are talking to," Mosley said. "This project is at least as much about rebuilding relationships and peacemaking as it is about building houses. We discovered that the North Koreans with whom we talked were as excited about that fact as we were."

The president of the Paektusan Academy noted that, "By building these houses together with our American friends we will begin to build trust, and by building trust we can begin to make peace.

Don Mosley, who helped to launch Habitat for Humanity housing projects in the former Zaire, Nicaragua, Lebanon, Jordan and several sites in the U.S., will lead the first few American teams beginning in the fall of 2010.

"I woke up at 3 a.m. back in my hotel room [after the dedication], still seeing the smiling faces of the farmers who are just the first of thousands we are likely to work beside in the months and years to come. The verse from Isaiah came to me – ‘I’m doing a new thing among you. Can you not perceive it?’" said Mosley. "Anyone who is scared by events like the gunboats that clashed not too far away from our groundbreaking or who thinks the violence that represents is the most powerful force in this world, just hasn’t seen the power of God’s love put into action."

If you’d like to volunteer with a Global Builder team to Korea, please visit our Global Builders page and fill out the on-line registration form.

Here are two videos from the groundbreaking ceremony: