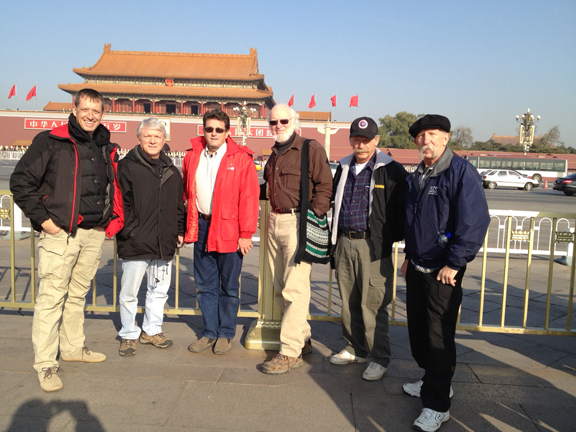 This seems to be a real moment of opportunity for peace in North Korea. Today, South Korea announced it was restoring aid to its rival to the north. The Democratic People’s Republic of Korea (North Korea), meanwhile, is demonstrating willingness to bend on its hard-line nuclear stances. And in the middle of all of this, six men from the United States are on a Fuller Center for Housing trip to build homes in the country. Read about it here.

This is a project like no other. American volunteers don’t just hop in and out of North Korea. And it certainly has been no simple journey for our team. But they’ve stuck to the mission, a mission that it is about far more than houses.

Could the fact that we enter the country just as there seems to be a thaw in frigid relations between South Korea and the North – as well as the U.S. and North Korea – be divine influence? Maybe, perhaps, I dunno. But the simple fact that all this is happening right now is something to be thankful for, regardless.

Our mission to build homes and peace in North Korea was one of the last initiatives approved by our founder, Millard Fuller, and he was excited about its prospects. That we’ve seen this through, at least to the point of actually beginning the building, is satisfying for that reason alone, among the many other reasons.

Another reason is that because this is such a rare mission, it has drawn media attention around the world in a matter of hours. It has appeared on media outlets’ websites all day long. It certainly helped that an Associated Press reporter was on the same flight into North Korea, all because our team was delayed on Saturday and had to wait until Tuesday to enter the country. Again, divine intervention?

And, again, whatever. If it is, woo-hoo! If pure coincidence, well, still, woo-hoo!

The media attention helps spread the name and the good work of The Fuller Center. And public awareness is a critical component of generating funds, support and volunteers. And that’s why all this media attention is important … not because we like hearing our name on the news.

To get an idea of just how much media interest this is getting, go to Google and search for “Fuller Center for Housing” in quotation marks for the past week or so. You’ll see how far and wide this story is traveling.

This mission won’t solve the world’s problems, but it is a step in the right direction. The two Koreas have technically been at war for decades. Maybe it’s time for engagement that involves hammers and not missiles. Maybe it’s time to give peace a chance.

Learn more about our work in the Democratic People’s Republic of Korea here.