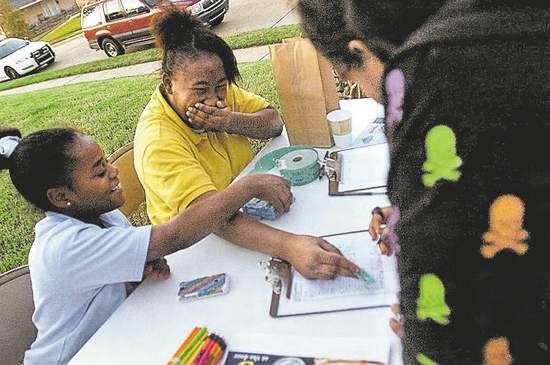 Shreveport’s Clay Street was one of about 90 residential byways transformed into a block party Tuesday evening, fostering a sense of community and sending a message to criminals that they are unwelcome.

For Allendale, Night Out’s crime awareness message hits particularly close to home. It is a neighborhood revitalized, said Shreveport police Cpl. Lonnie Haskins, who has been assigned to that district since he joined the force in 1997 and attended Tuesday’s event along with other police officers and firefighters.

Parents were grilling out and chatting with each other while children laughed, ate hot dogs, made sidewalk art, jumped in a bouncy house and explored a fire engine.

“In ‘97, ‘98, ‘99, we were bumpin’ and gunnin’ out here,” Haskins said of Allendale, where at the time at least five calls for service poured in each night. He’s seen the neighborhood turn around, something he said he never envisioned could happen and for which he credits the Fuller Center for Housing of Northwest Louisiana and Friendship Houses.