For Arumah Slyvanus, a new home means being reunited with his family 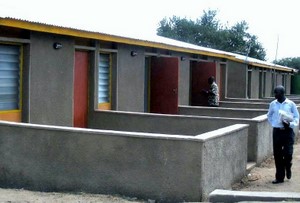 Arumah Slyvanus, a trader by profession, was born in the eastern region of Nigeria. He got married to his wife Ifeoma and between them they have three kids. The family stayed with their relatives in the eastern part of the country for over five years then it became clear to Slyvanus that he had to go and look for greener pastures in order to sustain his family.

He moved to Lagos and left his family back in the east. Getting to Lagos, he found out that his line of trade has been overcrowded and he could not get a break through. After years of struggling he decided to relocate again. This time he moved to Abuja, still retaining his family in the east with his relatives.

Getting to Abuja, Slyvanus’ business picked up with God by his side, but his greatest challenge was where to lay his head every night. After years of saving, he bought two shops and converted one to a sleeping room and the other for his business. During the restructuring in Abuja and just at the time he was thinking of bringing his family down to Abuja to join him, his room and shop got demolished, but he was able to save his goods.

This really affected him as he had to start all over again. The little savings he had, he used it to rent another shop, in order for business to continue. But he still had accommodation challenges. He had to squat with friends for years and when friends could no longer accommodate him, he moved into the security guards house in the Plaza where his shop was located. He stayed there for over a year until one day he got a flyer, reading ‘7 Steps To Owning Your Own House’ in his shop, he visited the Fuller Center office and was happy to find out it was an honest organization that really sells houses for $5,000.

Today, Slyvanus is a proud owner of a home and he has his family staying with him in Abuja. “I no longer have to rely on my relatives to shelter and care for my family. I am now a man,” said Slyvanus.