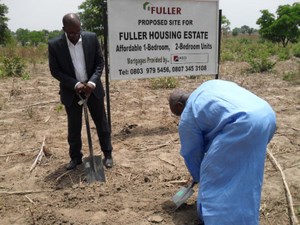 Submitted by The Fuller Center for Housing of Nigeria

When Aso Savings & Loans Plc, one of Nigeria’s most successful primary mortgage institutions, called The Fuller Center Nigeria in 2007 to seek out ways in which they could support the work of the center in Nigeria, little did both parties know that the initial seeds for an exciting new partnership were just being sowed.

Two and a half years later, on March 18, 2010, a brief ground-breaking and prototype viewing ceremony took place in a small, but strategically placed community called Luvu-Madaki, about 20 km from the nation’s capital, Abuja, where more than 300 people gathered from all walks of life to mark the start of this new relationship in which Aso Savings will be providing micro-mortgages for Fuller Center beneficiaries. Invitees gathered beside two blocks, each housing a one- and two-bedroom apartment.

In his brief remarks, Sam Odia explained that The Fuller Center Nigeria (registered in Nigeria as The Millard Fuller Foundation) operates an incremental housing system which it refers to as “Fuller Housing.” “Fuller Housing” takes the growing family’s housing dream and breaks it into smaller, more easily achieved steps. It encourages the migration of families into increasingly larger housing units once the mortgage for a smaller unit is paid off. In this way, a young family can move from a single room Fuller Center unit, obtained with a zero-interest mortgage into a two-room (or one-bedroom) “Fuller Housing” unit and then on to a two-bedroom unit purchased with an open market mortgage obtainable on the open market through a partnership arrangement such as the one Aso Savings has with The Fuller Center. This process of house migration takes place over a few short years when ordinarily, to have moved directly into a two- or three-bedroom unit may have been impossible. The role of The Fuller Center is primarily to help families take the first vital step on the incremental housing ladder.

“Nigeria today has a housing deficit of 16 million homes,” said Terver Gemade, Managing Director & Chief Executive of the Federal Housing Authority during his address at the groundbreaking ceremony. The partnership between Aso Savings and The Fuller Center will bring us closer to closing that yawning gap.

Apostle Alile, board member of The Fuller Center-Nigeria, in his welcome remarks, praised the tireless vision of Millard Fuller, the anniversary of whose passing away was marked by the national organization six weeks before. He enjoined all present to embrace Millard’s dream by supporting its work and thanked the partners, Aso Savings for being socially responsible enough to commit to providing homes for the needy at a time when it was not considered fashionable to do so.

In response, Hassan Usman, CEO of Aso Savings & Loans Plc thanked The Fuller Center for the opportunity to work as partners, saying that we were not just gathered to mark the commencement of a partnership but also to celebrate our common humanity in a nation where so often Christians were at loggerheads with Muslims for no apparent reason. He praised the visionary leadership of Millard Fuller and announced his organization’s commitment to sending a contingent of staff on a regular basis to the worksite.

The Aso-Fuller partnership hopes to build 32 homes this year and more than 100 next year. One-bedroom units will cost about $10,000 and two-bedroom units will cost $20,000. Each home will be semi-detached with a walled, private compound. A small surplus is built into the cost of each house, that will help The Foundation build more Fuller Center studio apartments on a zero-interest basis.

To learn more about the work in Nigeria visit the Nigeria page.

Interested in visiting Nigeria to see the housing model for yourself? Join a Global Builders trip there!