Dave Dobson has twice traveled to Haiti this year to build homes in The Fuller Center for Housing’s Lambi community and will lead another October 28-November 3 with his daughter, Rebecca Cosgrove. The Presbyterian Church of Mount Kisco has been a major supporter of Dobson’s work and has hosted a unique fundraiser for the upcoming Haiti trip:

They have built a house inside the church. 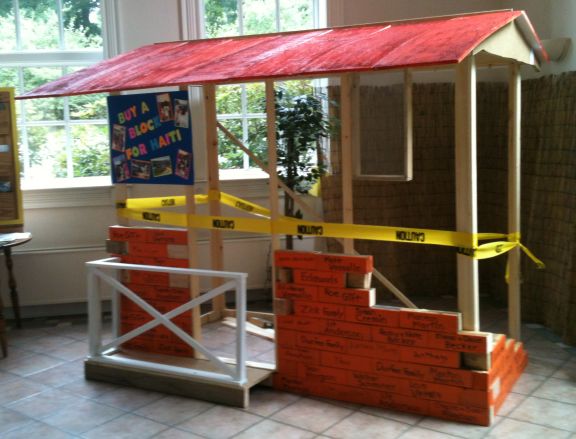 But this house is much smaller than the homes Dobson and his team will begin working on at the end of next month as One Small House partners once again with The Fuller Center. It is constructed of wood blocks that they have sold for $10 to adults and $5 for children. They’ve sold more than 400 blocks, and the colorful little home at the church is complete.

The “Buy a Block for Haiti” fundraiser was the brainchild of church member Lit Anderson, who painted each block made from pieces of 2×4 boards. Dobson then glued them in place on the house’s walls.

Dobson said completion of the colorful little home is just another example of how his church has stepped up to support such efforts.

“We have a very active social justice committee, and they’ve supported a lot of our housing projects,” he said. “This will be our third Haiti trip this year with some church members and some financial support from the church. We have 14 folks connected with our church going, a total of 20 on the trip. Our new pastor (Dale Southorn) is going to go, along with a couple of our youth leaders. It just so happens we have a couple other Presbyterian ministers coming who stumbled onto the website and are joining us, so it should be a good, hot, Halloween week in Haiti.”

Dobson, who serves on the Advisory Board and is the Safety Director for One Small House, has been involved in the affordable housing movement since the mid-1980s.

“I just figure everybody deserves a decent place to live, and it can make such a big difference in the lives of the family and the kids if they have a stable place they can make into a home,” he said.

Both One Small House and The Fuller Center aim to empower families and communities through decent housing, and he believes that is one reason for the success of the partnership in the Lambi community of Gressier, near Leogane, Haiti.

“Like any country that has the problems they have, you hope you’re not just sticking your finger in the dyke and are really doing something to make a difference,” he said. “But I like the fact that at the end of the week we have the opportunity to help a family move out of their ragged old tent into a permanent, solid home. That’s the best help we can give them.”

While the “Buy a Block for Haiti” fundraiser is complete, the church’s efforts are not complete. The children of the church are working to collect mirrors for the families of Lambi.

“One thing we’ve found in previous trips is that they have so few possessions,” Dobson said. “And they are so fascinated with photographs. So we had the idea of giving them a mirror that they could hang on their wall and actually see themselves once in a while. The kids are gonna collect some mirrors, and we’re gonna bring those along, along with some written things and pictures. So, we’re getting enthused about another trip.”

Encourage your church to become a Faith Builder!

Our Global Builders have many trips planned. Join an existing one or propose one!