More than 250 volunteers from across the nation have come to Atlantic City, N.J., this week for the 2013 Millard Fuller Legacy Build to repair houses damaged by Superstorm Sandy six months ago. Naturally, the Garden State of New Jersey leads the way with more than 40 New Jerseyans going to work in their home state.

Among those is Lisa Corsi of Oceanport, a community that also suffered Sandy’s wrath. Corsi is hardly a newcomer to The Fuller Center’s work. She has participated in two Fuller Center Bicycle Adventure cross-country trips and has worked on at least 10 different Fuller Center projects, including internationally. She is so used to working with The Fuller Center outside her home state that she keeps forgetting that this week she is working inside New Jersey. 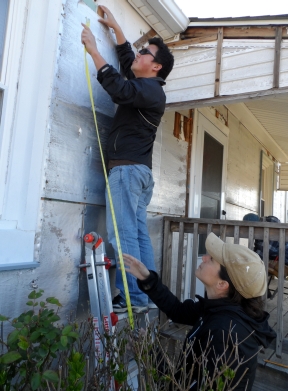 “It’s so nice that everyone took their time and traveled so far to come here,” she said. “But it’s hard to keep in mind that I’m home, that this is where I’m from. I keep forgetting that I’m in New Jersey because I’m used to going far away to help. When you go to El Salvador and places like that, you really feel like you’re going to help places that really need it. But you forget that in your backyard, help is needed, too — especially after a big storm like this.”

Victoria Gilbert is a 2011 Cherry Blossom Princess for the New Jersey State Society — which fosters educational, cultural and social activities and provides a networking link between New Jerseyans and former New Jerseyans in government and the private sector — and jumped at the opportunity to work in an area dear to her heart.

“I’m from South Jersey, so I’ve spent a lot of summers on the shore,” Gilbert said. “And when the New Jersey State Society asked for volunteers to come down and help out, I wanted to come. I’ve done a lot of home building around the country, but I’ve never done anything around the shore communities where I’ve spent a large part of my summers.”

Because her father works in Atlantic City, Superstorm Sandy was a scary time for the Sewell native who kept a close eye on news reports as her father participated in the immediate emergency response as Sandy came ashore.

“We were watching the water cover the island,” she recalled. “He would not leave.”

“I think it means more not necessarily because it’s our home state but because this is a place that we’ve been to really often,” the 24-year-old said of working in her home state. “Victoria and I both grew up in New Jersey and grew up going to the beach. It really does hit home when something like this happens so nearby. There’s been builds in places like New Orleans with Hurricane Katrina, and, of course, we feel for those people, but then when it happens so close to you, it’s right in your face. It’s not something you can really escape from. We really feel like it’s the right thing to do to come help out when we’re so close by.” 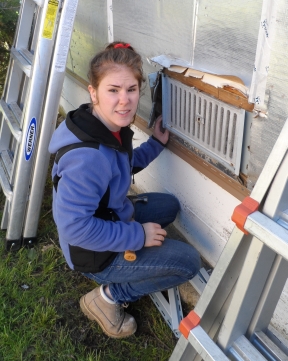 John Scott of Montclair is used to the aftermath of a natural disaster as he and friends have traveled to such sites as New Orleans and Tuscaloosa, Ala., after storms. The fact that this latest major natural disaster happened to hit his home state was just an unfortunate coincidence.

“For the last six years, we’ve been going to disaster relief areas, starting after Katrina,” he said. “Obviously, this year, the biggest disaster relief need was in New Jersey. We’ve seen some pretty miserable stuff in disaster sites.”

Jack Gordon, the house captain where workers are partnering with the Rev. Clifford Trapp to repair his home, is from Tabernacle and helped found The Fuller Center for Housing in the New Jersey Pines, the hosts of this year’s Legacy Build. They had planned to have the build in Pemberton, much closer to Tabernacle but changed course in early November, leaving them little time to prepare for working in Atlantic City. But it was a move he says had to be made.

“We changed to here, which is much for the better,” he said. “This is a long-term investment in time and resources, more needed, too.”

Though he was leading work on a house with a crew made up of all New Jerseyans except one Wisconsin resident, he said the fact that they were all from the Garden State was not why he was enjoying his leadership role this week.