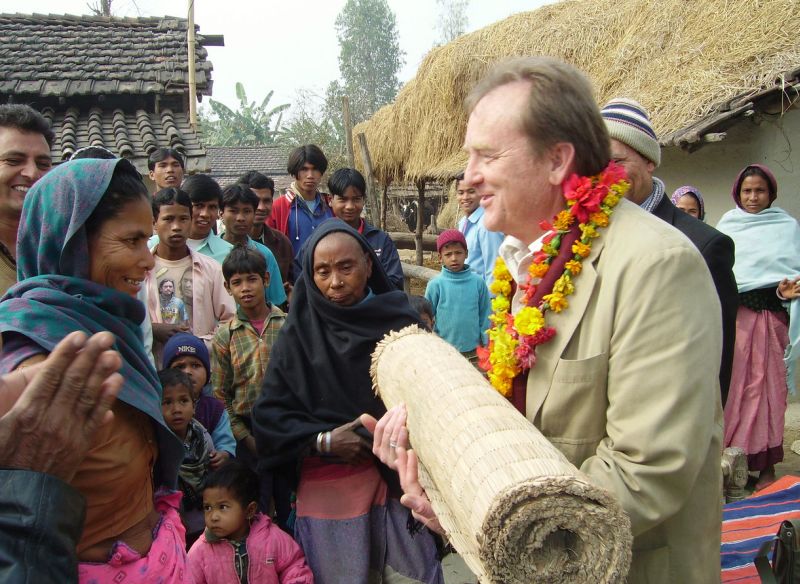 I first traveled to Nepal in September of 2005.  This was one of the two places that set The Fuller Center for Housing on the path to becoming a worldwide housing ministry.  (The other was post-Katrina Shreveport.)  I had been fascinated by that part of the world from my earliest memories, and visiting Kathmandu was a dream come true.

Nepal is a mystical place.  From the moment you land, with Pampas grass fronds waving their greeting, you know that adventure awaits.  Kathmandu is an ancient city with Hindu temples and shrines at every corner.  The Chinese destruction of Tibet has brought many Buddhists into the country, bringing their temples and customs as well.  Visiting Nepal is like stepping back in time.   Way back.

Nepal has changed since my first visit there.  Just ten years ago the civil war with the Maoists was taking lives, the king was on his throne, and any Nepali who converted to Christianity was in violation of constitutional prohibitions.  Today the war is over, the king has been deposed, and new laws allow for religious freedom.  Nepal is a country with one foot in the Middle Ages and the other cautiously stepping into the 21st century.

It is one of the world’s poorest countries.  In the midst of ancient splendor can be found some of the worst housing conditions I’ve encountered.  A quarter of the population lives below the poverty line and the need for decent housing was great before the earthquake struck.  Samuel Tamang, our man on the ground there, reports that up to 90% of the houses in the central hill country have been destroyed.  Trishuli, where we are working now and which was going to be the site of our 1,000th international house next month, is in the heart of the hill country or, as they call it there, the ‘hilly’ country.

Nepal’s march into the modern age has been interrupted.  It will take years to rebuild and The Fuller Center will be front and center getting families into simple, decent homes.  We know that our work can’t begin until the emergency relief efforts are concluded, but we are making plans now to play a significant role in the reconstruction effort.

A problem organizations like ours face is that the work we do comes after the initial reaction, and the tremendous outpouring of generosity that attends it, is past.  That’s why we’re asking our friends and supporters to give to our Disaster Recovery Fund now so work can start as soon as possible, knowing that that could be weeks or months away.  On behalf of those families who will benefit from your kindness, thank you.

CLICK HERE TO DONATE TO THE DISASTER RECOVERY FUND