When historic flooding struck much of southern Louisiana in 2016, Teressa Bell helped her wheelchair-bound daughter Donna get to the second-floor deck of their home to await rescue by boat. But long after floodwaters receded, their problems continued.

They were among the fortunate Louisiana residents to receive FEMA money to make repairs on their home. Unfortunately, a crooked contractor absconded with their money without making repairs. With their remaining repair funds, they were again targeted by a shyster. They had nearly given up hope. Then the Fuller Center Disaster ReBuilders came along.

On Thursday, more than two years after their dramatic rescue, the Bells’ repaired home was dedicated with a huge crowd of volunteers and supporters in attendance, including U.S. Sen. John Kennedy of Louisiana.

“We didn’t know we had so many friends!” an elated Teressa said after cutting the ribbon.

The Disaster ReBuilders have been working for the past month in areas of North Carolina in areas struck by Hurricane Florence and for the past year in east Texas helping families impacted by Hurricane Harvey. But two years ago they began working in Louisiana, setting up a base camp in Denham Springs — a small community in the heart of the flood zone.

Ginger Ford Northshore Fuller Center for Housing Executive Director Tamara Danel urged the Disaster ReBuilders to consider helping families who were falling between the cracks of traditional assistance offered by insurance and government agencies. Having worked with the Disaster ReBuilders since the days of Hurricane Katrina, Danel knew their expertise would be put to good use again in Louisiana.

“Thousands of volunteers from around the country have come to Southeast Louisiana to build and repair houses for low-income families, disabled families and people who just did not have the resources to come back after the devastation,” said Danel, filling in for Disaster ReBuilders President Bart Tucker, who was hard at work in North Carolina on Thursday with other members of his Disaster ReBuilders team.

“We’re just so happy to be a Christian organization that can partner with churches like Christ Community Church (local house sponsor) and with volunteers from all walks of life and all faith backgrounds to make simple, decent housing affordable and available to everyone in need,” added Danel, whose Ginger Ford Northshore Fuller Center has two new homes scheduled to be dedicated this coming Sunday.

Sen. Kennedy expressed his appreciation for all of the supporters and volunteers who helped make the project possible and shared the frustration the Bell family experienced with shysters.

“I’m so happy for this wonderful family, Teressa,” he said. “I want the name of that contractor who took your money and didn’t do his work because we’re gonna chase him all over Hades and half of Georgia until we can get him — I can promise you that.

“I don’t know why bad things happen to good people,” Sen. Kennedy added. “If I make it to Heaven someday, I’m going to ask the Good Lord. But what counts in life is not whether you fall down — we’re gonna always fall down some. What counts is whether you get back up.”

He noted that media attention quickly turns to new disasters and thanked those who continue to help families in the months and years of recovery after natural disasters.

“What counts is what you do in life when people aren’t looking and the cameras aren’t there,” he said. “And a lot of people did a lot of good for their fellow man and woman, and it just makes me proud to be a part of this great country.”

Before Teressa and Donna Bell cut the ribbon and entered the home, construction leader Peter Salemme presented the two with blankets created by volunteers, as well as an “instruction manual.”

Your gifts make these stories possible!
Click here to give today!

WBRZ-TV has a great report on the dedication that you can watch by clicking the image below: 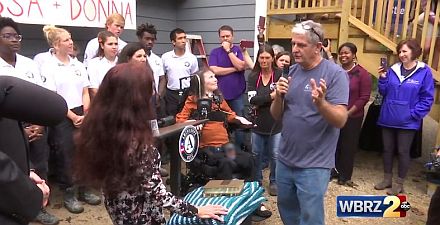