During my 22-plus years in the newspaper business, I learned that there’s always more to the story. The more you dig, the more you learn.

Of course, the same principle applies to positive stories. Charlie Park (whose wonderful radio voice still echoes in my head months after the 2011 Millard Fuller Legacy Build in Minden, La.) sent me a few pictures of a couple from Saginaw, Mich., who came to work this past weekend with the Webster Parish covenant partner he leads.

It didn’t take much digging for Charlie and his broadcast journalist background to find out that this couple who decided to make a pit stop for a little volunteer work in Springhill, La., had a connection beyond merely having heard about the wonderful work of The Fuller Center for Housing in a newspaper, on Facebook or from a friend. Charlie learned that John and Debbie Haiderer’s son, Mike, participated in our 2011 Fuller Center Bicycle Adventure.

Of course, Charlie found that connection interesting and evidence that the Bicycle Adventure’s secondary mission after fundraising — raising awareness — is paying off, too. He also sees it as a ripple effect from the Legacy Build, that the spirit from the build is still alive and working.

But, yes, there’s more to the story.

Indeed, Mike participated in last year’s ride. In fact, he made the entire trip from Seattle to Washington, D.C., making him part of the group that pushed the ride’s total fundraising past the $500,000 mark in its first four years.

But that’s not all: It also changed his life. Here’s part of what the 25-year-old had to say about the ride: “It was the best experience of my life. It completely transformed my outlook on life. Going into the ride last year, I had no idea what God wanted me to do with my life. Looking back, God had His hand in making it possible for me to do the trip. God used many bad things in life to lead me to and eventually allow me to do the trip. On the ride, God revealed what he wanted me to do. I got a job to teach overseas in the Azores at Lajes Air Force Base.”

But that’s not all: Mike is coming back for the 2012 Bicycle Adventure and will ride the entire West Coast portion from Seattle to San Diego.

But that’s not all: After graphic designer Richard Aguirre, Bicycle Adventure leader Allen Slabaugh and I combed through many cover options for the 2012 Bicycle Adventure promotional and recruitment brochure, we settled upon a picture of Mike Haiderer hoisting his bicycle over his head. (Click here for the pdf of the Bicycle Adventure brochure.)

But that’s not all: Mike is also featured in an article by the Overseas Federation of Teachers that you can see below.

And I’m sure that’s not all, but even brilliant journalists like myself have to quit digging after a while. 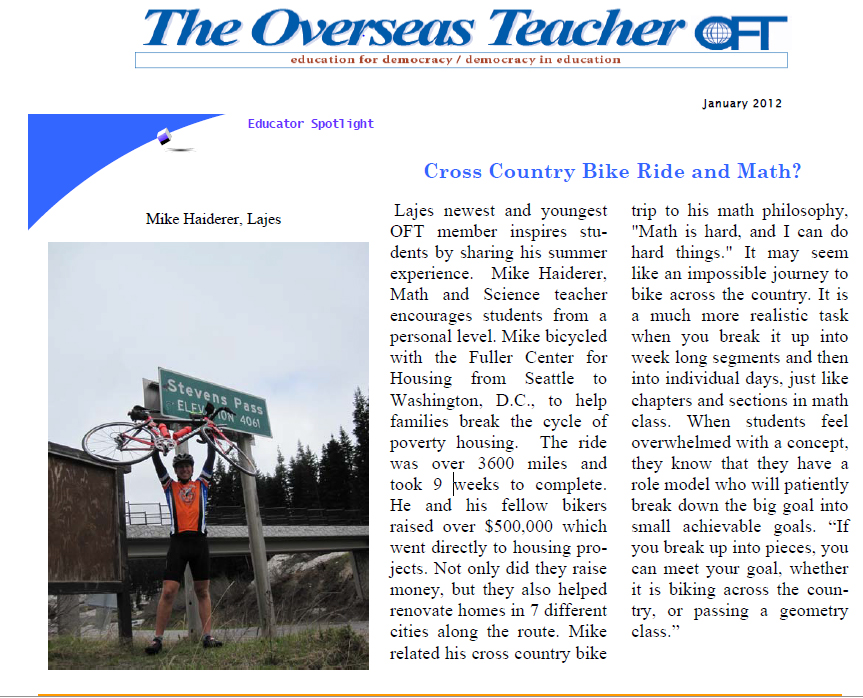