Fuller Center RV Builders make a home and a wedding very special for one family. 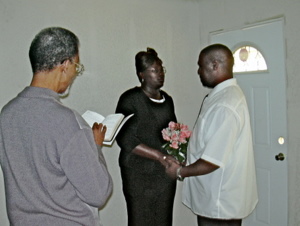 A house can be built in just one month, but a marriage takes a lifetime. There are few better places to build a marriage and raise a family than under the roof of a safe, decent, affordable house.

The latest home to be dedicated in Minden, La., was christened not just by the love of the RV Builders and University of Cincinnati students who poured their hearts and labor into it for four weeks, but by the shared love of Johnny and Christine Walker. Standing in the entrance of their new home, surrounded by family, Fuller Center volunteers and Christine’s daughters Destiny and Kierra, the couple entered into the new life a home brings and the new life of a marriage. On March 28, 2009, Johnny and Christine received the keys to their new house and exchanged wedding rings.

Christine and Johnny had heard of other couples being married in their new homes and had talked about doing the same after the build was completed, but RV Builders team leader Diane Gravlee said the volunteers were teasing the couple to get married before they left so they could attend the wedding.

“I don’t know why they decided to go ahead and get married while we were still there, but it was a delight,” said Diane. “We had come to feel they were part of our building family.” 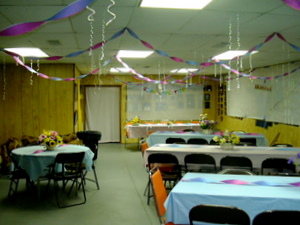 The date was set for the Saturday between the third and fourth week of construction. With the help of Melissa Foster from the Webster Parish Fuller Center, RV Builders planned a reception at the fairgrounds of the local RV park where the volunteer rigs were stationed. The women purchased decorations in blue and pink – the bride’s choice – and borrowed flowers from the local United Methodist church. When Johnny and Christine arrived with a cake, they found the community hall transformed with streamers, ribbons and handmade signs of congratulations.

Fuller Center RV Builder Mary Campbell, who has participated in almost 30 builds in seven years as a Habitat Care-A-Vanner, said it was one of the most meaningful projects she has ever worked on.

The on-site wedding was a first for The Fuller Center. Such an event, which truly made the new house a home, represents The Fuller Center’s faithful mission to raise up not just houses, but lives and families.