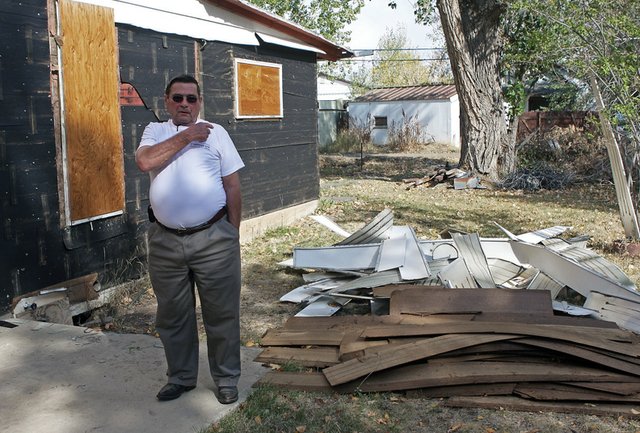 Neil Folks stood in front of a dilapidated, boarded-up building on Thursday.

“Yeah, it’s been quite an eyesore in the community,” Folks said. “The building was condemned by the city because the south foundation fell into the basement.”

The structure he spoke of is the old Simmons Rooming House in the 700 block of Yampa Avenue. Soon, volunteer laborers with the Moffat County Fuller Center for Housing will tear the building down and erect a new one in its place. It will be the group’s first project.

The Fuller Center is a “nonprofit, ecumenical Christian housing ministry dedicated to eliminating poverty housing worldwide,” according to the organization’s website.

The Moffat County chapter of the Fuller Center is six-month-old organization that emerged from the now-defunct local chapter of Habitat for Humanity. Folks is the new group’s president.

There are two reasons members of the local Habitat for Humanity decided to “put out a new shingle,” Folks said.

“Habitat for Humanity doesn’t want to work in cities with populations below 15,000,” Folks said. “That was kind of a big hang-up.”

“In order to get our own 501(c)3 — to become completely independent here in the county — we went with Fuller,” Folks said.

Folks, 71, has been retired for a decade and has been active in the community since. He works as a counselor for the Advocates Crisis Support Services and as a chaplain for the Moffat County Jail and Northwest Colorado Visiting Nurse Association.

“There are a lot of types of grief … out there,” he said. “A lot of the young folks who have grief are unable to find decent housing, decent jobs. … (The Fuller Center) just seemed to fit in with what I’m already doing, just at a different level.” 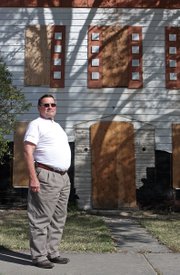 Folks said he’s ready to “swing a hammer” when the time comes, but for now, he’s focusing on administrative tasks and getting the new organization off the ground.

Part of the startup is setting the record straight on what his organization does. Misconceptions are abound in the community, Folks said.

“People need to understand that this is not a giveaway program,” Folks said. “People think these homes are given away and the new owners can quickly turn it over for a profit.

Folks said that applying for a Fuller Center home is much like getting a mortgage, only harder and with more rules.

First, you must qualify. To be eligible, families must make 50 percent or less than the mean family income in their community.

After prospective buyers prove their eligibility, applicants must submit to credit and background checks.

“It’s quite a process,” Folks said. “It might take anywhere from five months to a year before a family is accepted.”

Once accepted, the family must purchase the home.

Folks said the purchase price depends on the cost to build it.

“No labor is figured into (the price),” Folks said. “It’s all supplies, and the labor is donated. Most of the materials are given to us or sold at cost by businesses.”

After the family purchases the home, they’re not allowed to “flip” it, Folks said. Families may sell the home for 2 percent above what they paid for it, but they must sell it to another Fuller Center-selected family.

“It’s not an income-making situation for people,” Folks said. “We’re just giving young couples … a chance to get into a home.”

Folks said the Fuller Center isn’t making a profit on the sale, either. The group sells the home at cost and rolls those funds into the next homebuilding project. 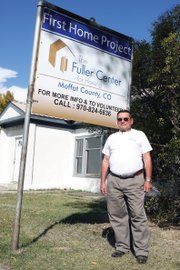 Regarding the current project on Yampa Avenue, Folks said demolition should be complete before “winter sets in.” He hopes the new building will be ready to move into by midsummer 2011.

“It’s going to be a duplex — a two-family home,” Robertson said.

Robertson said the duplex will be energy efficient with six-inch foam-insulated walls, a tankless water-heating system and more. Also, both units will face south to maximize solar gain.

Learn more about the work of Moffat County’s Fuller Center in Craig, Colo.

Read the mission statement of the Fuller Center for Housing here.