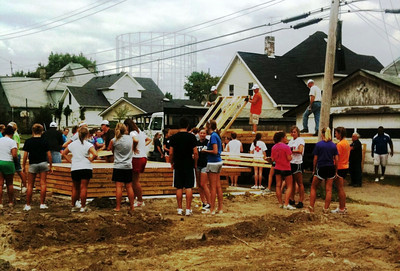 INDIANAPOLIS – Following the efforts that resulted in the construction of seven new homes and the renovation of 17 additional properties in a Fountain Square neighborhood last fall, officials for The Fuller Center for Housing of Central Indiana today unveiled their plans to build two more new homes in the neighborhood.

Indianapolis Mayor Greg Ballard and David Snell, president, The Fuller Center for Housing International, joined with church and community leaders, as well as representatives of The Fuller Center for Housing of Central Indiana, South East Neighborhood Development (SEND) and the People Helping People (PHP) Network to discuss the project today at a morning news conference.

The construction of the two new homes will be part of a “worldwide one-week build” that the Fuller Center of Housing International is organizing to construct or renovate 100 homes around the world beginning Labor Day – Sept. 5, 2011.

At the centerpiece of today’s heartfelt initiative, two local churches and a non-profit organization stepped forward as “sponsors” to help with the fund raising efforts needed for covering the cost of constructing each of the new homes.

Pastor Greg Dixon Jr. – representing the Indianapolis Baptist Temple – and Pastor Paul Erny – from the Community Church at Murphy’s Landing – together with their respective congregations have pledged to help raise the $50,000 necessary for covering the costs associated with building each of the new homes.

The other sponsor is a non-profit organization – Ev’ryMan Victory – founded by local entrepreneur Jonathan Byrd II. In 2009, Byrd founded the organization to honor his father’s legacy of bearing other’s burdens. 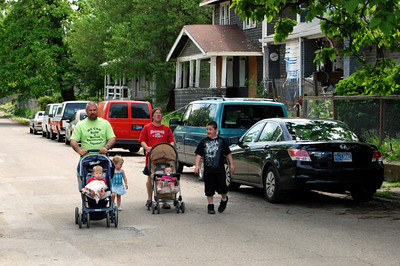 “In this life, improving the quality of life within a community is sometimes achieved simply by reaching out to others with a small measure of kindness…and, today, you are witnessing the start of something we believe will grow to have a profound and positive impact on all of us,” said Pastor Dixon.

Pastor Erny added, “A well-constructed foundation is something from which we can build the strength to grow and mature throughout our lives. And, soon, we will be blessed to come together and find a way to help someone experience just how strong and important having something like that in place to rely on and weather almost any storm or overcome the toughest obstacles.”

For his part, Byrd views the challenge of this project represents an opportunity to do something in a neighborhood that “…is not unlike almost anything my father did throughout his entire life without giving it a second thought.”

According to City-County Councillor Jeff Cardwell, at its core, the dedication and determination to see this project to its completion mirrors the passion held by the late Millard Fuller, whose vision to eliminate poverty housing worldwide was a driving force in establishing, first, Habitat for Humanity and, later, the Fuller Center for Housing.

Hearing the sentiment expressed by Cardwell is one shared by Snell and Chuck Vogt, president of the local Covenant Partner – Fuller Center for Housing of Central Indiana.

Cardwell added that a fund raising effort will begin right away to help secure the needed funding. In turn, "…it will provide someone with their own foundation from which to draw a greater degree of strength and reassurance in their own daily lives".

With that, Cardwell expressed his satisfaction that the Fountain Square neighborhood will build on its roots and be a place that “…people want to grow up in, go to school and live out their lives with their families nearby".

Snell concluded by saying, “this is a wonderful program that benefits so many deserving people", adding, “during his 40 years’ building houses, Millard Fuller helped some 350,000 families; representing more than 1.5 million people, experience the joy of having a decent, affordable home to call their own. It is a legacy that ought to be celebrated and built upon, and that’s just what we’ll do with the 3rd Millard Fuller Legacy Build. We will work together to provide another 100 families around the world with a decent place to live.”


• Learn more about volunteering with The Fuller Center of Central Indiana
• Listen to an interview with Jeff Cardwell on the "Miracle on St. Paul Street" project