The area around St. Paul Street in Indianapolis’ Fountain Square neighborhood had hit rock bottom – so much so that even the gangs, prostitutes and drug dealers were beginning to move on. That’s when Marti LaMar, a longtime resident, and her neighbors seized an opportunity to reclaim Fountain Square.

“It got to the point where it was just a hostile street,” LaMar said. “For many years, it just kept going down, down, down. It hit bottom, to where it couldn’t go down any farther. It was horrible. The houses were getting empty, and it was getting to a level where we could fight it rather than hide in the house and be barricaded in. When it came that it felt that way, it just seemed the timing was right, so we became a block club.”

They formed the We Can Neighborhood Association and began to clean up the area. Then, last year, the neighborhood was the host site for the 2010 Millard Fuller Legacy Build. The transformation of Fountain Square after the building of seven new homes and renovation of 15 others is now known as “The Miracle on Saint Paul Street.”

And St. Paul Street is now known as a place people want to live. 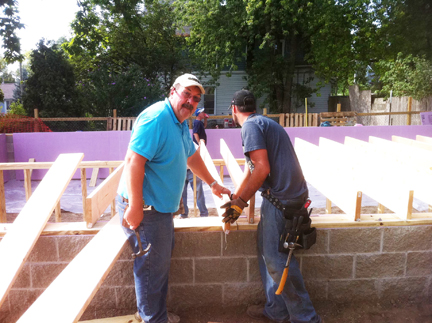 “The transformation is unbelievable,” said LaMar, who has lived in the area nearly 25 years and is the president of the Neighborhood Association. “And it spreads out to the rest of our neighborhood, too. It became peaceful. We hear crickets. You hear people hammering. The whole neighborhood is feeling better and coming out. You see people sitting on benches. You see people walking.”

The ‘Miracle’ continues, beginning on Labor Day with a weeklong build that will see two new homes built and two homes rehabilitated with the help of at least 65 volunteers, said Ron Fisher, a board member with the Central Indiana Fuller Center for Housing who has worked on about 400 homes since getting involved with Habitat for Humanity in 1987 and then joining The Fuller Center for Housing. Fisher was a part of the 2010 Legacy Build and was back at the site Saturday in preparation for next week’s build. He has witnessed the transformation of the community up close.

“There was a 20-year-old young man who walked down there Saturday and made the comment ‘I used to be scared walking down this street, and I’m not anymore,’” Fisher said. “You can’t get a better statement than that. That street was full of drugs and prostitution, and today it’s not. Every house on that street has got a purpose. It’s about a block and a half long, but it’s a super block and a half.”

Having worked on a few hundred homes and Jimmy Carter Work Projects, Fisher has seen plenty of evidence of the value of simple, decent, affordable housing. He didn’t need further evidence, but got some this past Christmas when he returned to the scene of the 2010 Legacy Build.

“I’ll never forget last Christmas when I stopped by and saw a little boy sitting on his couch,” Fisher recalls. “I said, ‘How do you like your new home?’ He said, ‘We love it. The Devil doesn’t live here.’ He said he used to live in an apartment complex with thin walls and a lady would beat on the walls and say ‘Shut those little devils up!’

“To hear those boys liked where they live gives you a warm feeling,” Fisher continued. “I love to see little kids have a good place to live and the opportunities that come with it. Their health is better. Their education can be better. All the opportunity is afforded to them in a simple, decent house.”

LaMar can attest to the difference in the neighborhood as seen through the eyes of children.

“The kids didn’t play on our street,” LaMar said. “My street is Churchman, the next street over (from St. Paul). But we have people and kids coming over to our street saying that they want to live there. Ain’t that something? They come from other parts of the neighborhood and wish they could have a house on that street. They want to live on our street. I want us to keep on going, and I want them to be proud of their street just as we are on ours and St. Paul.”

“It’s great to see a family have a home that’s not going to have one any other way – and now that they have a home, they can take care of their family,” Fisher said. “They have a warm and comfortable place they can call home. It’s good to see children raised in these good homes instead of slums.”

LaMar said The Fuller Center’s continuing work in her neighborhood, such as the Labor Day week build, is critical to spreading the success story she can see through her front door.

“A lot of times somebody will come in and just patch something and then take off out of a poor neighborhood,” she said. “But they didn’t. They didn’t leave. You gotta have that. You can’t just take off and leave the people. It gives us hope, too, that they’re not gonna leave. It empowers us. It’s empowering the whole neighborhood.

“The folks in the neighborhood are reclaiming this story. If that build had not happened, it wouldn’t have happened. That build helped a lot more than just that street. We had a teeny, baby start going on, but that build was just really unbelievable. It wasn’t until the build and everything went on that it started to amaze the people. It’s inspired a lot of people. It gives you hope. It gives the neighborhood a block away hiding inside their homes hope.”

Fisher, who refers to himself as a jack of all trades and the Central Indiana Fuller Center’s “sergeant at arms,” said that the Legacy Build and other such projects not only inspire the neighborhoods they serve, but they also light a fire in volunteers.

“We want to make sure all the volunteers have a great experience, that everybody comes back,” he said. “That’s very, very important. When people give, their heart comes out. Even if they don’t believe in God, their quiet heart becomes real because they’re giving back. Every man has that inner soul in him that wants to give. I find that we light a fire in that inner soul. People want to help people.”

If you need more information about the build, contact the Central Indiana Fuller Center at centralindiana@fullercenter.org or call 317-493-8914.

Learn about, volunteer for or donate to the 2011 Millard Fuller Legacy Build.

View this video of Marti LaMar from July 2011, nearly one year after the 2010 Millard Fuller Legacy Build.