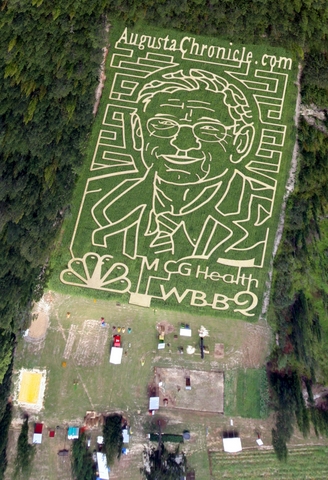 Put ‘weaving through corn planted in the likeness of Fuller Center Founder Millard Fuller’ on your list of things to do this fall.

Kackleberry Farms in Lousisville, Ga. is featuring Fuller in its annual Corn Maze. In addition, the farm is donating a portion of proceeds from this season’s ticket sales to their local Fuller Center Covenant Partner, the Jefferson County Fuller Center.

Mitch Vaughn, president of the Jefferson County Fuller Center, is also the man behind the corn maze. Vaughn and his wife Lisa are the owners and operators of the farm—which also features a pumpkin patch, a corn cannon, pedal-cart racing, duck racing, steer roping and many other farm and fall-related games and activities.

Mitch and Lisa met Millard at the end of 2008, just a few months before Millard passed away unexpectedly.

“The way he talked about the Fuller Center, the enthusiasm he had about it—that really stuck with me,” Mitch said. “When he passed away, we wanted to memorialize him as well as give back to our local Fuller Center.”

Kackleberry Farm attracts thousands of visitors who come for some “good, clean family fun,” according to Mitch. Last year the farm had about 11,000 visitors, almost doubling its debut year total of 6,000. Now in it’s third year, the Vaughns expect even higher attendance. Last weekend they had around 450 visitors.

On Saturday some people came just so they could say they’d been in a Millard Fuller-shaped corn maze. But some of the visitors haven’t heard of Millard Fuller, or if they have there are things they don’t know about The Fuller Center.

“We fill them in. We’ve told all our employees what he did,” Mitch said. There’s also a sign posted near the maze filled with information about Millard and The Fuller Center—especially about the Jefferson County covenant partner.

Mitch said the need for Greater Blessing projects in Jefferson County (located about 40 miles west of Augusta, Ga.) is high.  The most common repairs needed are on roofs and mobile homes. The Jefferson County Fuller Center has at least three such projects lined up.

“We’re hoping that [the money] can go to help someone—that we can at least help one or two families with a Greater Blessing project,” Mitch said.

A portion of proceeds from the maze also goes to Medical College of Georgia Health Children’s Medical Center. And people who come can bring a non-perishable food item for a local food pantry.

The Millard Fuller maze will be open through Nov. 8. Check out Kackleberry Farm online for more details about visiting. And learn more about the Fuller Center for Housing of Jefferson County here.