Millard Fuller will be recognized for innovation and humanitarian work at the International Builders Show in Las Vegas on Jan. 20. The Hearthstone BUILDER Humanitarian Award recognizes builders who “go the extra mile” by demonstrating a lifetime commitment to making their communities better places to work and live.

This year’s award will be presented to 30 people, in honor of BUILDER Magazine’s 30-year anniversary. Millard and The Fuller Center for Housing will be recognized at a dinner and in a BUILDER Magazine cover story. 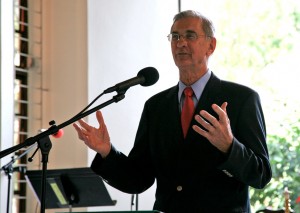 Other award recipients this year include economist Alan Greenspan, former chairman of the U.S. Federal Reserve Board, S. Richard Fedrizzi of the U.S. Green Building Council, Herbert Kohler, Jr. of the Kohler Company, and Timothy R. Eller of Centex Homes.

Hearthstone was the first, and is currently the largest, institutional investment manager in the country dedicated to the residential building industry. BUILDERS Magazine is the number one monthly magazine of the housing industry and is predicted to reach over 190,000 readers in 2009. The two organizations have partnered in awarding the humanitarian award for nine years, and to date have donated more than $7 million to various charities.

Since Fuller and his wife, Linda, founded Habitat for Humanity in 1976, the organization has built more than 300,000 homes in more than 3,000 communities. In 2005, Fuller founded the Fuller Center for Housing, which in its first three years has spanned the globe and with covenant partners in 20 states and 15 countries on five continents.