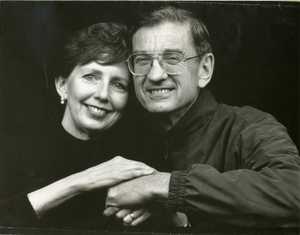 History of the Legacy Build:

Millard Fuller planned to celebrate his 50th wedding anniversary with his wife Linda by holding a build in August of 2009.

Instead of an anniversary celebration, the build became a 100-house celebration in honor of Mr. Fuller, who passed away on Feb. 3, 2009.

The first annual Millard Fuller Legacy Build was anchored in Lanett, Ala., the hometown of Mr. Fuller. The second will be in Indianapolis, Ind. in 2010.

The Millard and Linda Fuller Build

The Millard and Linda Fuller Build was the precursor to the Legacy Build. It took place in the following locations: 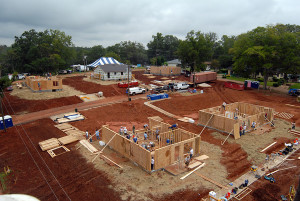 During the week of Aug. 30 – Sept. 4, 2009 Fuller Center covenant partners across the U.S. and around the world built, renovated and/or dedicated homes with families in need as part of the inaugural Millard Fuller Legacy Build. At least 100 simple, decent houses were built or renovated in the weeks and months leading up to the event, with all the houses being dedicated in a worldwide expression of love in action.

Witness the excitement in Lanett, Ala.

From Arkansas to Peru, from Virginia to El Salvador, more than 1,000 volunteers participated in the event honoring The Fuller Center’s late founder, Millard Fuller, and his vision of eliminating poverty housing worldwide.

Click here to visit the official MFLB 2009 page with stories, videos and photos.

The build took place in Indianapolis, Ind. from Sept. 6-10, 2010. Fifteen homes were renovated or repaired and six new homes were constructed as part of the build.

Millard’s legacy continues everyday with the help and support of people like you. Want to get involved? You can volunteer at another Fuller Center Covenant Partner. You can spread the word, pray for our mission and support us financially.