Anastasia Howland of Norton, Mass., may be the youngest volunteer at this year’s Millard Fuller Legacy Build, but she also is among the most eager to work. 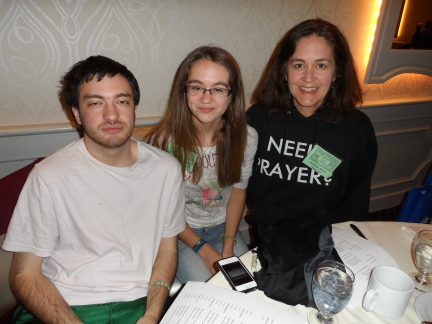 She learned about the build during another service trip with her aunt to Brockton, Mass., where they worked with an organization that ministers to the homeless. During the trip, her aunt, Elizabeth Bristol, told her about the Legacy Build that kicked off Sunday night with a dinner and planning event at The Chelsea hotel in Atlantic City, N.J.

“I was like, ‘Oh, that sounds like a good time,’” Howland said. “I’ve really always wanted to go on a mission trip, but I’ve never been able to make it to one here or out of the country and decided I would like to go.”

But, first, she had to get permission to miss a week of school.

“I wrote a nice letter to all my teachers and explained what I was doing, and they gave me any work I needed to do, so I’m here,” she said. “I expect lots of work and lots of going to bed early and getting sweaty, but it should be a good time.”

Another first-timer at the Legacy Build is Mike White of Waynesboro, Ga., who learned about The Fuller Center and its work from his daughter, Rebecca. Rebecca is a graduate of Mercer University in Macon, Ga., where she became acquainted with Millard’s son Chris Fuller, who directs Baptist ministries at the school, and his wife, Dianne, who directs The Fuller Center’s Planned Giving program.

Rebecca has said she drew tremendous inspiration from reading Millard Fuller’s books and worked with The Fuller Center in El Salvador in 2009 and 2010. After several years of teaching, she is now in seminary at Mercer University’s Atlanta campus. She didn’t have to work too hard to convince him as he is used to similar builds after having twice gone to the Dominican Republic to build churches.

“She said, ‘Dad, it’s great and I think you ought to go.’ So I said I’d think about it,” he recalled. “Then I got an email this year from The Fuller Center, and I said why the heck not. I signed up and don’t know anybody here, but I’ve already met some great people. 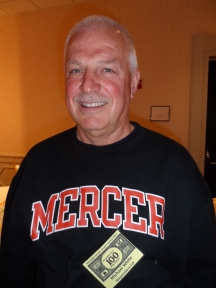 “I’m a supervisor with International Paper and have been there for 30 years, and the good part of this is I don’t have to supervise anybody,” he added. “I’m on vacation. Just tell me what you want me to do, whatever it is. I’m looking forward to it.”

“We stayed in gyms at high schools and sleep on the floor and bring in an air mattress and pump it up,” he said of his eight Bike Ride Across Georgia trips. “This is very similar except that you’re off the floor and have your own cot. The shower trailers are great. I’m fine with it. You’ve got to be patient, standing in line for the shower after you’ve worked all day. You’re serving the Lord, and you take what comes your way.”

More than 250 volunteers are in Atlantic City this week to repair more than 20 homes damaged by Superstorm Sandy six months ago.