When coming to an epic blitz build like this year’s Millard Fuller Legacy Build, volunteers undoubtedly have a jumble of thoughts and ideas about the week. They may be contemplating the noble deed of helping their neighbors and giving people in need a hand up. They may have pre-build jitters and worry about falling off a roof … or a piece of the roof falling on them. Maybe they’re excited about meeting the homeowners, excited to see old friends or just excited to get out of the office.

As part of the communications staff, I also have a jumble of thoughts running through my head – like making sure we successfully document all the volunteers who have come from far and near to help someone have a place to call home, all the homeowners who are working hard for a new place they and their families can be safe and secure for years to come and all the sponsors and people who made this thing possible. I want to make sure we capture all of it – the stories, the smiles, the camaraderie, the tears of joy – everything.

But today, I want to write about the cake we had last night. 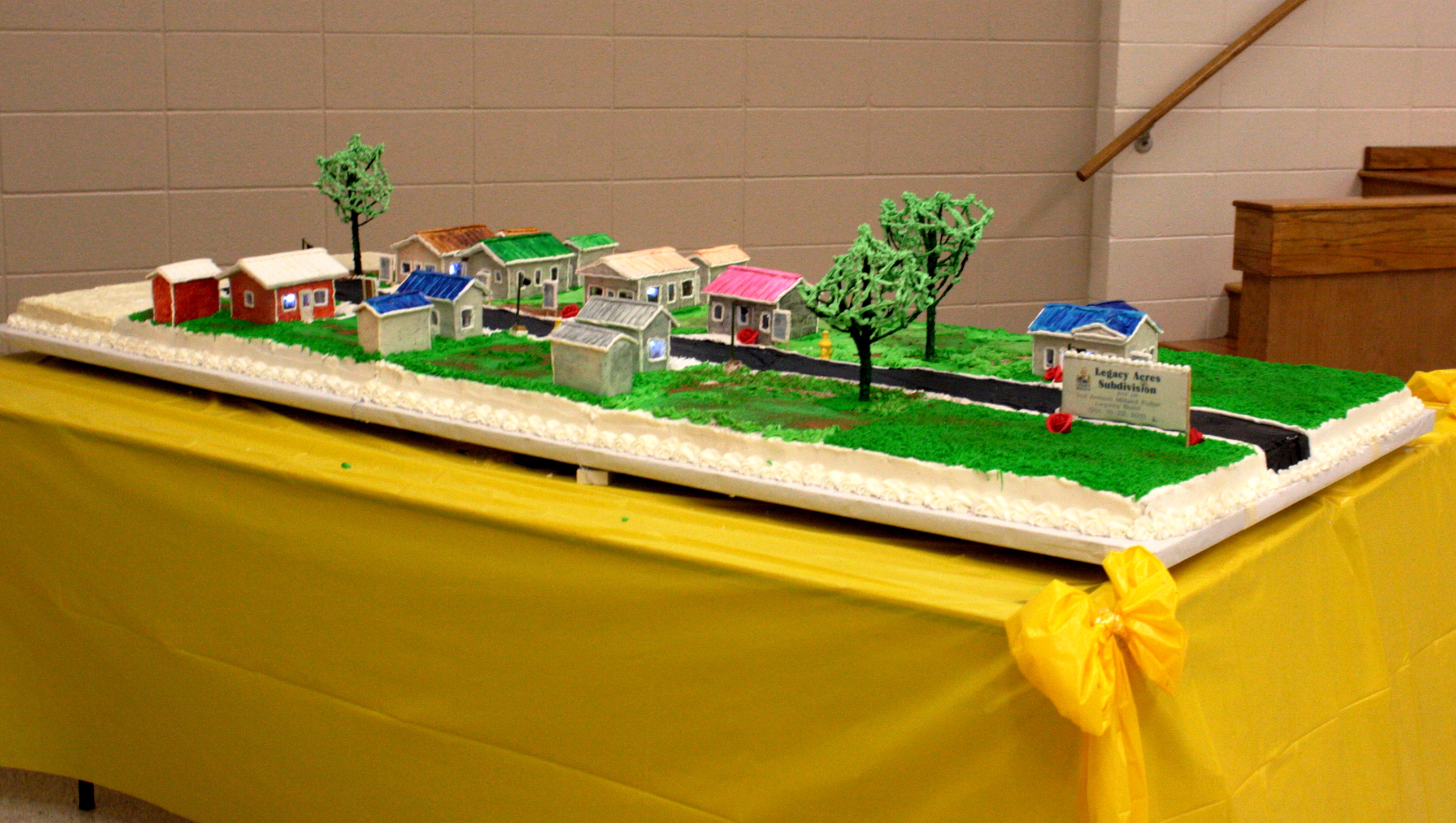 I’m willing to bet one of the last things people think about on such a work site is food – least of all, a dessert such as cake. But in reality, food is one of the most important parts of the build (and technically speaking dessert is food) – food is the fuel that feeds the volunteers, who build the homes where the homeowners will live.

In some very rare cases, that whole process is bypassed and the food is where the homeowners will live.

That’s right – our dessert last night was a small-scale replica of what Millard Fuller Drive will look like at the end of the week here in Minden, La. Although at roughly twelve by four feet, it wasn’t very small by cake standards.

So we feasted our eyes on the future of Millard Fuller Drive, a future rendered by Joyce Joiner, whose husband Billy is a site supervisor for the build. We admired the delicacy of the trees on the property, the tiny lights inside the gingerbread houses, the green icing grass, the sign in the front of the house – and then we ate it (some of it).

Although the cake itself was truly a work of art, the best part about this vision of sweetness is that it was a prelude to reality. By the end of the week, we’ll be able to see the real deal, not the sugary version – that is, helping our neighbors will be transformed from a concept in cake-form to a tangible row of homes lining Millard Fuller Legacy Drive where there were none at the beginning of the week.

And when we hold dedication ceremonies at the end of the week, and the communications team here can document all the families moving into their new homes to start a new reality, tears of joy and all – that’ll be the real icing on the cake (pun intended).