Fuller Center for Housing supporters last week were polled and asked to pick the Story of the Year for 2014 from nine exciting developments. With 31 percent of the 144 votes, an annual favorite — the Millard Fuller Legacy Build — was chosen as the year’s top story.

The Legacy Build edged out the Fuller Center’s Bicycle 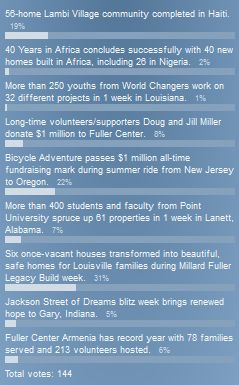 Adventure’s crossing the $1 million all-time fundraising mark (22%) and the completion of the 56-home Lambi Village community in Haiti.

The 2014 Legacy Build was hosted by Louisville and showcased what The Fuller Center does better than anyone — turning dilapidated and vacant properties into like-new homes for good families. Six such homes were restored during the 2014 Legacy Build — all in Louisville’s West End neighborhood known as Shawnee.

Among those who partnered to build and purchase a home were Army veteran Conrad Bennett and wife Deborah who said that Fuller Center volunteers built much more than houses in the West End of Louisville — which they want to be a better place for their 21 grandchildren and great-grandchildren.

“If you don’t really believe in humanity, all you’ve got to do is come down here and watch humanity at work,” Conrad said. “What these people have done is they’ve brought hope. It brings pride back into the community — not only pride in your own home but pride in the whole neighborhood. You have a sense of belonging.”

This year’s Millard Fuller Legacy Build will be part of The Fuller Center’s 10th Anniversary Celebration and will be held in the Allendale neighborhood of Shreveport, Louisiana, site of the very first Fuller Center home builds in 2005.

Click here to read the complete report on last year’s Legacy Build in Louisville and watch the video overview below: