This week, an amalgam of volunteers at the Millard Fuller Legacy Build have come together to build homes for people in 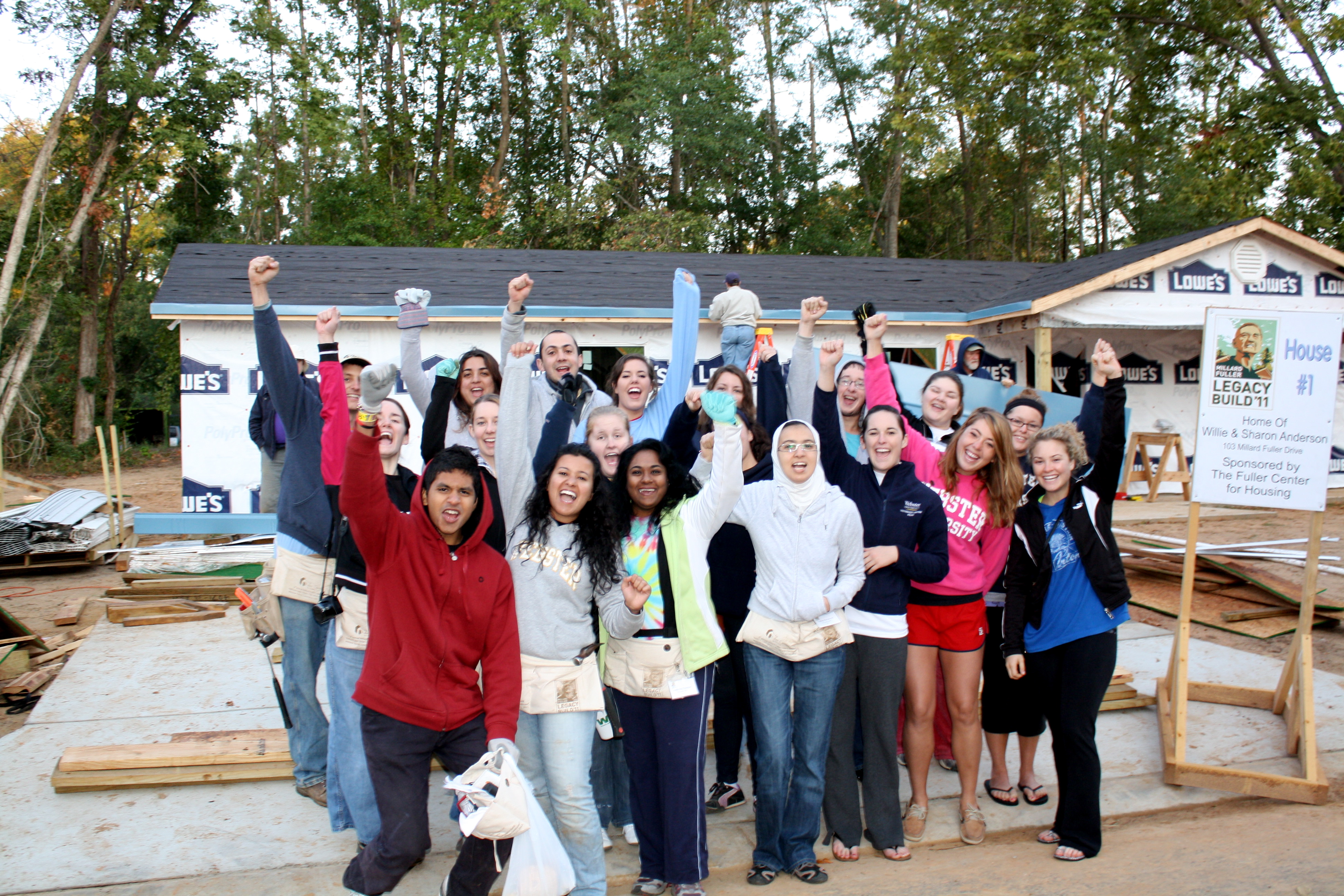 need – and each of these behind-the-scenes and unpaid workers here has a story to tell. That’s especially true of the 18-member crew from Webster University in St. Louis, which graced the work site with a youthful presence and a diverse representation of international students.

Sara Sabaa, a senior pre-engineering major at Webster, organized the group back in July after receiving a call from The Fuller Center’s director of international field operations, Ryan Iafigliola, while she was working as a receptionist at the University Center.

“I was giving him information for the director of the university, the campus activities number … in my head I was thinking about who was going to do this. But then while I was giving him the numbers I was like, ‘oh wait, I’m the president of the Red Cross on campus, and I’m really interested in going,’” Sabaa said. “So I was like, you know what, instead of you calling all these people, I’m going to recruit people and I’m going to bring 20 people to the site.”

Over the next three months, she worked hard to recruit volunteers and fundraise.

Sunitha Banjaday, a grad student from Burma who is studying Human Resources management, is one such student.

"I came to know about this through the Red Cross, where I’m a treasurer. I thought, let me just try something new – doing some good deeds in a new country," she said. "I’m really enjoying it. I got to meet new people and make new friends."

"It’s been a very eye-opening experience. I got to meet a whole bunch of people who are in desperate need of home remaking. I was honored to help them," McQueen said. "Emma [a homeowner] is 92 and she’s never painted before, and she was watching me paint a wall. I asked her if she ever painted, and she said ‘no ma’am.’ And I said, ‘do you want to try?’ And she said ‘yes ma’am.’ So I handed her a paintbrush and helped her hold it because she doesn’t have a whole lot of strength, and she painted her wall for the first time."

Their dedication to community service is representative of the whole campus, which is widely known for both its diversity and its commitment to service.

“Webster University is a very diverse university. St. Louis campus is the main campus, and we have campuses all around the world – Thailand, Netherlands, England, Switzerland, and we have international students from all over,” Sabaa said. “I think the percentage of international students is kind of equal to the American students on campus. We have at least one student from each country in the world.”

In fact, Sabaa is from Baghdad, Iraq.

“Since I was a little kid, I grew up bilingual and my dream was to graduate from Baghdad University and work for the embassy, or work for the UN and be a translator. Then the invasion in 2003 happened, and we had to leave the country in 2006 because it was dangerous,” she said.

“At the time when I applied for Webster I was a refugee in Syria. I graduated high school and I was looking for scholarships and internships. I told my mentor, community service is my life. I love this, and I love interacting with people. So she said, ‘well maybe you should consider applying for Webster.’ I followed her advice and I got accepted with a full ride. Webster has been my home for four years in a row.”

When she was still in Syria, Sabaa said she reinforced her desire to do community service.

“When we were under the protection of the UN in Syria, Red Cross and the UN actually helped my family and all the Iraqi refugees at the time to survive,” she said. “After I got full tuition that’s how I got to be here – with community service and NGOs. So I feel like I need to do more things like this to pay back at least and do something.”

Sabaa’s family – including her parents, younger sister, two brothers, and grandfather – is still back in Syria and Iraq. She said she wants to return to Iraq to help the people there sometime after the country is politically and socially stabilized.

“Definitely, I want to go back. But ri 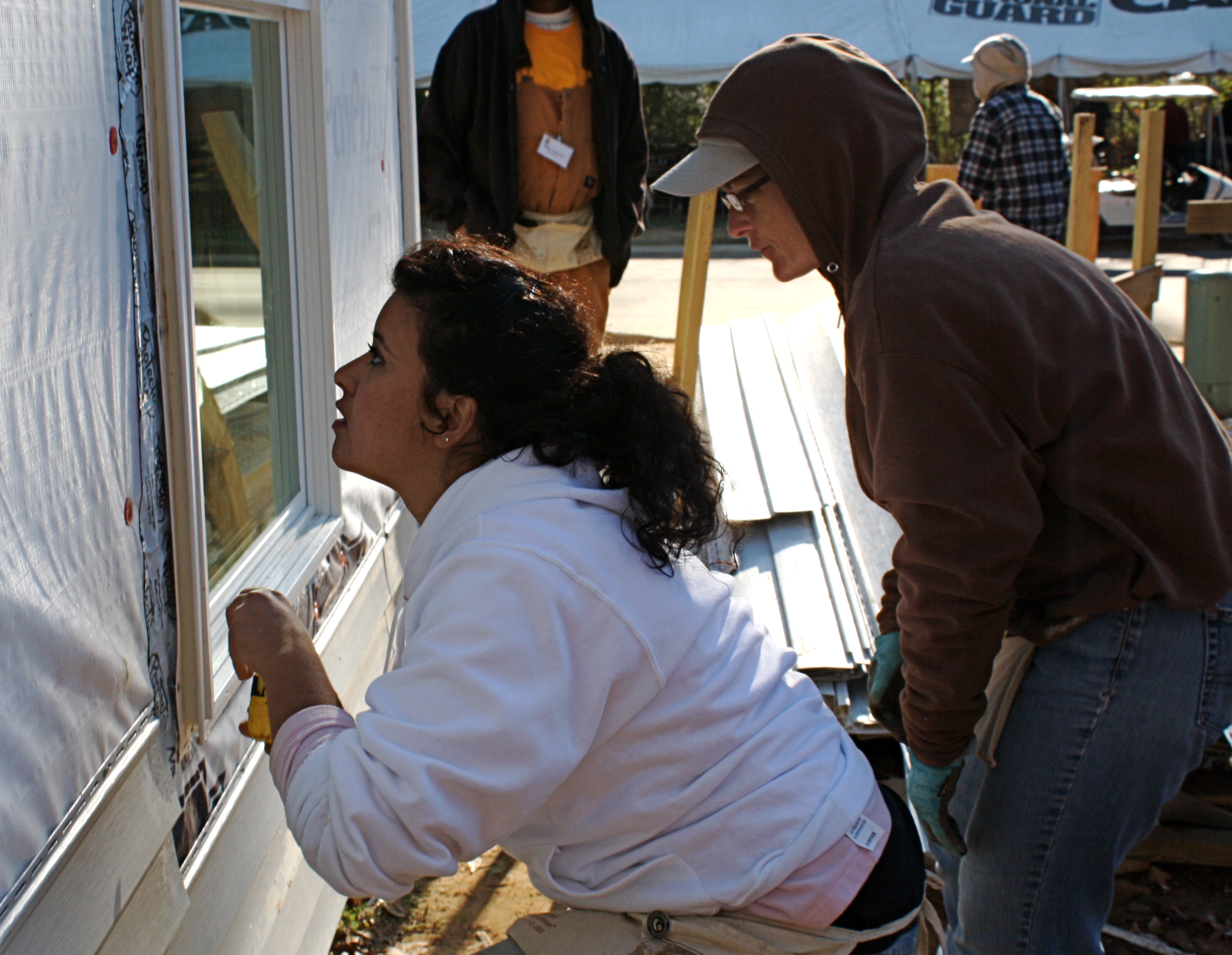 ght now my country is still in a mess and rebuilding hasn’t started yet. It’s too dangerous still right now. I want to go back when the time is right. I don’t think my voice will be heard right now,” she said. “When there’s government and true leadership, then people can rebuild and the country is going to get back on track. That’s when I will say, yes, I can do this.”

But in the meantime, she said she’ll do all she can to help the people where she is – no matter where that is.

“I believe in God and I believe that God would never let us go. Helping human beings is a very honorable thing to me,” she said. “I can’t go back physically myself yet to help my country, so I’m like, hey I can do it here.”

This week is a prime example for Sabaa and her fellow students.

“It’s been a great week. We all loved it. We all came with no experience at all. We all thought we would be standing to the side just handing nails and hammers to people. But when we got here actually our house captains were giving us work to do,” she said. “This is the first time I’ve been on a construction site. I didn’t know most of the names of the tools and materials and now I feel like, hey I can do this, it’s a piece of cake.”

Check out more pictures from the week