In the fall of 2012, Melissa Merrill left a very good job as a mechanical engineer to accept a position of leadership. However, she did not leave for the money.

Now, after leading the 2013 Bicycle Adventure, Merrill has agreed to stay on for another year to lead the 2014 Bicycle Adventure, which will include a weeklong spring ride down The Natchez Trace Parkway and a summer ride from Atlantic City, N.J., to Astoria, Ore.

“Obviously, The Fuller Center’s mission is something I’m very passionate about, as well as how the Bicycle Adventure changes the lives of the people who participate in it. It’s been a blessing to be a part of it.”

Next year’s ride will be the 7th Bicycle Adventure, during which its cumulative fundraising total should top $1 million after having raised more than $825,000 in its first six years. Did playing a part in the million-dollar milestone have anything to do with Merrill’s return?

“A little bit,” she said with a laugh. “It is pretty cool to be part of that legacy building up to that and hopefully passing that goal next year.”

Among those thrilled to have Merrill return is Ryan Iafigliola, who founded the Bicycle Adventure and led the first three Adventures. He is now The Fuller Center’s Director of International Field Operations but occasionally dons the orange jersey of the Adventure to lend his support.

“After an extensive search, we determined that the only one fit to follow in Melissa’s shoes … was Melissa,” Iafigliola said. “Melissa is one of those rare people who try to do the right things for the right reasons. Here she is doing another bicycle ride across the entire country, and she doesn’t even care as much about cycling as she does about affordable housing — totally selfless. We’re so blessed to have her volunteering another year to lead the ride.”

After the 400-mile March 14-23 spring ride down The Natchez Trace Parkway, the summer ride will take cyclists 3,600 miles June 5-August 10 through 15 states from Atlantic to Pacific. Along the way, they are planning to work on seven Fuller Center build projects.

“I think we’ve got a really awesome route picked out for next year,” she said. “It’ll be a beautiful route going across the northern United States, and we’ll also get to visit many covenant partners along the way. And with all the cool sites we’ll get to see like Mount Rushmore and others, I’m really excited about it.”

For more details about the 2014 route, schedule and different ways to join, click here.

Your support makes the Fuller Center Bicycle Adventure pay off for families in need! 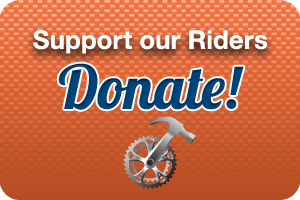