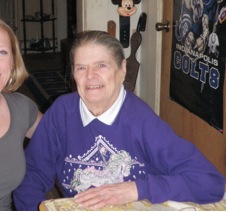 At 89, Marge Korbe is as tough and independent as they come. With the help of her daughter Rose, who lives next door, she intends to remain in her home and in the neighborhood on Villa Avenue until the end.

“I’m staying right here ‘til it’s my turn,” she says, with a typical good natured smile.

Born in the small town of Goodland, Ind. in 1921, Marge married her husband Frank in January 1945 when he was on furlough from the army. Frank came home in October of that year, the couple settled in Indianapolis, and they had five children over the course of the next 13 years. Frank, who worked in the construction industry among other things, built several homes for the Korbes over the years-–each time a little bigger to accommodate a growing family.

When Frank passed away of an aneurism at just 48 years old, Marge was left to raise the children alone. She quickly realized that landlords were reluctant to rent to someone with so many children, and drove the streets looking for the home she still lives in today. She bought it because it had a fenced-in yard, and she knew she could give the kids a place to play and keep them in sight and safe. When they strayed beyond the fence, Marge utilized her whistling skills.

As Rose can attest, “Mom had one hell of a whistle.” The kids knew to stay in earshot and head for home when they heard it- and never to make Mom whistle more than three times. That diligence has paid off. Today Marge has 12 grandchildren, 11 great-grandchildren, and her first great-great-grandchild is on the way this year.

To keep the family going, Marge did all kinds of jobs–from babysitting to sorting glass bottles at Kimble Glass, cooking at a nearby convent, and finally spending over a decade working at a Speedway gas station. Things were never easy. One year when they were visiting family at Christmas, the house was broken into. In the years after Frank passed away, Marge says she “made a lot of soup.”

She says she’s seen the neighborhood through a lot of change, for good and bad, over time. Marge had a fire in 1988, and it was over a year before she could move back into her home. The house still needs a lot of work to keep it livable, none of which Marge or her daughter can do alone.

Donate now to the "Miracle on St. Paul!"