My name is Lauryn Kostopoulos and I am one of the youngest riders here. My friend Michael Lamorgese and I are both 19 years old and decided to embark on the journey of our lifetime this summer. We met at school, Sacred Heart University, and were texting over our Christmas break and jokingly said we wanted to bike across the country. We went searching on the internet to try to find a good organization to go with and we came across the Fuller Center For Housing Bicycle Adventure. We did some reading into it and automatically fell in love with it; right then and there we knew this was the one and we stopped looking for any others.

I started telling my family and friends about what I wanted to do and they all said I was crazy and that my parents would never let me do it. It took some convincing, especially my dad, but they eventually caved in and let me embark on this crazy adventure. I didn’t have a road bike so I had to use the bike assistance program. I had to raise a little but extra money, but I received a nice new bike thanks to Cycle World. I had to buy all the accessories for the bike and also the cycling clothes. To fundraise for this trip I had to to ask family and friends to donate and I also did something a little different than most, I recycled. I collected bottle upon bottles from family and friends and even my high school. I became a regular at the bottle return place; I always came with the same amount of bags, seven! Everyone was so supportive of me and gave whatever they could, and I was so appreciative of it.

When the time came to make my way to Atlantic City I became very nervous. When Mike and I got to the center we were staying at we walked in and asked ourselves what have we gotten ourselves into. Everyone there was a regular cyclist and many of them were even on cycling teams or clubs. And then there was the two of us who had just gotten our bikes right then and there and had no clue how to use the gears or even clip in or out of our pedals. The first person that welcomed us was Jenny and her husband Greg, who eventually became known as Grenny.

The first night was a little awkward because no one knew anybody and we were all getting adjusted to how we were going to be living for the next 66 days, out of our suitcases. The first night I had Leah as my bunkmate, who later became one of my best friends here and someone who I call my momma. The journey began and there was no turning back.

Even though it has only been a little over three weeks in this trip I have met some amazing and loving people. Lydia, Mike and I are the three youngest riders and also the most inexperienced. That hasn’t stopped us though, often we are leading packs or traveling to new heights and lengths that we never thought were possible. Everyone is so supportive of us and they are always there to lend a hand or some expertise when we need it. They are constantly helping us with our bikes because they know that we had no clue what we are doing. We have learned so much from them already and I’m excited to see what they have in store for us next. The people on the bike adventure are the most amazing and loving people I have ever met.

Leah is like a mother figure to Lydia, Mike, and me and is always hanging out with us kids. She is always there to listen when I need to talk and when I grow up I know I’m am going to be just like her! She has inspired me to become not only a better person, but to push myself to greater lengths than I thought possible. Greg and Jenny were there with me when I had to climb up the four mile mountain in PA. Had it not been for the two of them, especially Greg talking to me and motivating me all the way up the mountain, I don’t think I would have made it. Every time I thought about quitting he would keep saying that I could make it and think about what you are going to feel when you make it up without stopping. The two of them are awesome cycling buddies and they are an even cuter couple.

Lydia is full of jokes, and never fails to break out into song. She is the next closest in age to me and is super outdoorsy and adventurous. She is from Missouri so she has a southern accent, so often times we made fun of her for how she says certain words. At one point she was trying to make a comeback so she said do you need some "alloy" for that burn, so I just looked at her in confusion and said do you mean "aloe." To this day I still make fun of her for it, but we both laugh about it. 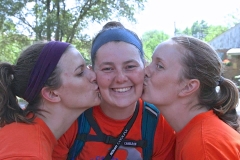 Dani and Katie are like two older sisters to me. We have had some good times together and bonded right away. We like to go on walks together to talk about life and often times end up biking together. They are awesome people and I know that we are going to be lifelong friends.They also gave me my nickname, Cheeky. We recently had to say goodbye to Katie, which was really tough because we wanted to have more time with her, three weeks just wasn’t enough.

I have learned so much about others and about myself so far. It’s amazing to see how little people have, but how much hope and love they have in their hearts. It doesn’t matter what they may or may not have, they have faith in God that in the end everything is going to work out. I have also learned that there is still a bunch of good people left in the world. This has also been an eye opening experience on the build days. Many times the homes that we are working on are in poverty areas and the people living in the homes may not have the means, skill, or strength to complete the projects needed to do to the house. We have done stuff from extreme gardening, to painting, to cleaning out hoarders’ basements. At the end of the day these people are so grateful and appreciative of the services we have done for the day. I know that I can’t help everyone, but those that we have the opportunity to help makes all the difference. We are able to go into their homes in the morning and by the end of the day we have given them a sense of hope again and the chance to be comfortable in their home again.

This has been the best, most exciting time of my life so far. I am so excited to see what’s next and to keep learning more about the people on this adventure. In just three weeks we have created an unbreakable bond and also a family. Even though we span the world, I know we will all stay in touch when this is over. I am beyond grateful that I have been given this opportunity to see this amazing country on a bicycle and to also meet such amazing people. I am looking forward to see what the next six weeks has in store for us.

I would also like to share a bible verse that Leah showed me:
"Not only so, but we also rejoice in our sufferings, because we know that suffering produces perseverance; perseverance, character; and character, hope. And hope does not disappoint us, because God has poured out his love into our hearts by the Holy Spirt, whom he has given us."
Romans 5:3-5