A pillow embroidered with the words “life’s uncertain, eat dessert first” rests on a couch in Bob and Judy Hippler’s RV, a cozy, carpeted home on wheels in which the Hipplers travel all over the country. A black and white picture of the couple sits on a coffee table, and curtains grace the windows. 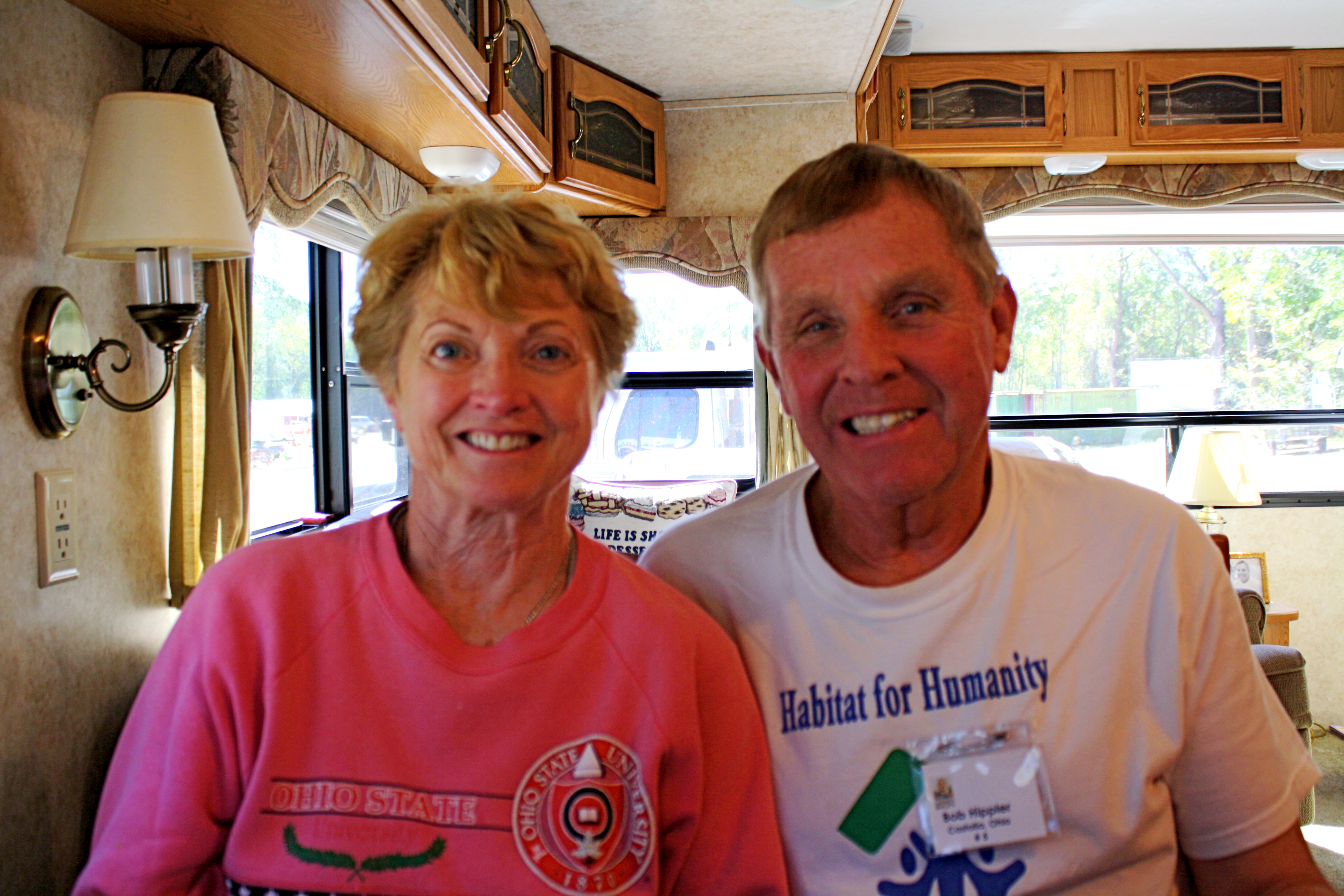 But when looking at this couple, it’s clear that these are all just details – after so many years blending together in a happy mosaic of life, home is simply wherever they are, as long as they’re together.

And to celebrate the 50 years they’ve spent together in marriage, they’re building homes for families at The Millard Fuller Legacy Build this week.

“It just blows my mind that they chose to spend this time with us … we are so grateful,” said director of Webster Parish Fuller Center Charlie Park at a special dinner celebration for the couple.

But it was no accident that the Hipplers chose to celebrate on the build site.

“For our anniversary, we wanted to do something special,” Judy said. “We couldn’t think of a nicer way to celebrate.  We feel very blessed, and we just want to pass it on.”

“God’s been good to us. So we can give something back,” Bob added.

After 50 years together, the Hipplers said they’ve learned a few lessons about successfully nurturing their marriage.

“We don’t have any really great secret to share. We just love each other and that’s how it is,” Bob said. “I want her to be happy. When she’s happy, I’m happy.”

A large part of the success of their relationship is clearly their ability to find good in the other – not surprisingly, that’s a skill for which each wanted to give the other more credit.

“He’s very easy to get along with. And he’s the kindest person I know,” Judy said. “I mean, we’ve been together for over 50 years, with our courting and everything, and I do not know a nicer person.”

“She’s very easy to get along with too,” Bob added. “I’ve been very fortunate to find somebody like her. We’re really made for each other.”

Bob and Judy first met at the grocery store at which they both worked in Castalia, Ohio – Bob was in the meat department and Judy was a cashier.

“She was actually kind of the one who was checking me out,” Bob said. “But it was pretty much love at first sight.”

They got married soon after, and spent the next several decades raising three children and working in Castalia.

After retiring, the Hipplers spent most of their time volunteering with their local Habitat for Humanity chapter, maintaining yards for their neighbors, and spending time with their three grown children, all of whom live less than two miles away.

“Our friends would say, ‘gee, now that you’re retired, are you going to go south for the winter?’ And we said, ‘no we like the change of scenery. This is fine. We’ll stay here,’” Judy said. “We had no dreams of heading south during the winter months.”

However, Katrina’s decimation of New Orleans in 2006 was a catalyst for change in the couple’s life.

“We wanted to be part of the rebuild,” Judy said.

Ever since then, the Hipplers have hit the road in their RV for the first three months of the year, traveling all over the U.S. to visit old friends and build homes wherever there’s a need.

“It’s just a great way to spend your retirement. It just beats making doctor appointments and deciding which restaurant you’re going to go out to eat at,” Judy said. “This life – volunteering for Habitat or the Fuller Center – we’ve found it very fulfilling. It’s just made our retirement blessed.”

Check out more blogs, photos, videos and news stories from the Legacy Build!