When Louisville, Ky., Mayor Greg Fischer handed the keys to the newest homeowner partner with the Fuller Center for Housing of Louisville on Wednesday, it was a celebration for a pair of survivors who got second chances — homeowner Carolyn Mayes and the property itself. 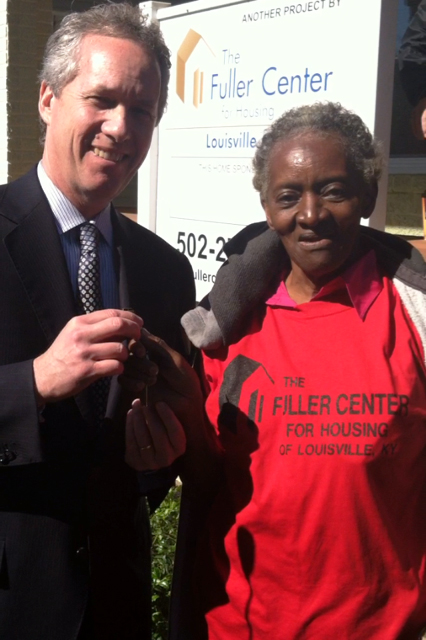 Mayes, 61, already an asthmatic, was diagnosed with lung cancer in 2005 and had to have part of her lung removed. When it showed up again last year, she went through radiation treatments and beat the cancer back once again. She works at the Spirit of Love Center, a church adjacent to the Shawnee neighborhood that has been revitalized by The Fuller Center of Louisville.

“I’m blessed to be able to still be here and be a testimony to somebody else who might be going through the same thing and let them know, hey, God has got you. He can heal you,” she said.

Her South 41st Street home has bounced back, as well, and stands as an example of what The Fuller Center’s Save a House/Make a Home initiative is all about. It sits in the same Shawnee neighborhood where FCH Louisville has been working on similar house reclamation projects and where it hosted the Derby City Build last year.

“This is what we’ve been doing in Louisville from the beginning,” said Louisville’s Don Erler, a member of the Fuller Center’s Board of Directors who has been instrumental in shaping the Save a House/Make a Home initiative. “It’s exactly what we’re talking about because it is a house that was foreclosed on, was bought at the courthouse door by an investor and the investor donated it to us.”

Even so, FCH Louisville had to sit on the property for a year because Kentucky has a right of redemption law that allows a party whose property has been foreclosed upon to reclaim that property if the foreclosed sales price is two-thirds of the appraised value. But the party must pay the sum of the unpaid loan, plus costs and 10 percent interest, and they must do so within one year. When FCH Louisville did receive the property, it swung into action with a lot of support for a woman loved by the community and the Fuller Center covenant partner that she had been supporting since it began working in the neighborhood.

“The house has been worked on by people who came to our Derby City Build, by the Kentucky Changers, by the Spirit of Love volunteers and a lot of other volunteers,” Erler said. “And a lot of the funds that were generated to do the renovation were generated by contributions coming from local financial institutions.”

“With millions of American families living in substandard conditions and millions of houses sitting vacant, The Fuller Center’s Save a House/Make a Home initiative is an idea whose time has come, and the Louisville Fuller Center is leading the way,” Fuller Center for Housing President David Snell said. “May the good Lord bless Carolyn Mayes and her new home, and may hundreds of families follow her as we work to turn vacant houses back into homes.”

Mayes, who will share her home with a disabled daughter and two grandsons, was a Fuller Center volunteer through Spirit of Love long before she thought of becoming a Fuller Center homeowner herself.

“She’s a good-hearted lady who meets our qualifications and has stuck with us from the beginning of our activities down there in that neighborhood,” Erler said. “Her family has put in the sweat-equity hours, and she’s finally going to have her own home about half a block from the church where she works, right in that same area where we’ve been working. Spirit of Love has been sort of our rock there since we started in Boston Court, in that particular neighborhood.” 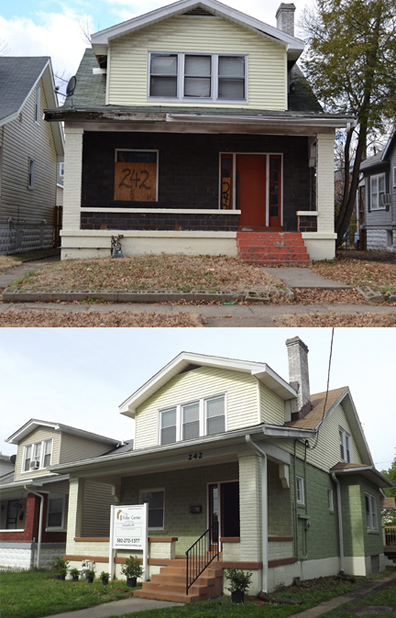 “A person with a disability can’t do too much, but I went out and did what I could do,” Mayes said. “I’ve been involved with them ever since those first houses were built in Boston Court. It’s a giving thing. If I can give of my time to help somebody else out, it’s all good. I have no problem with doing that.”

Grace Patterson, who chairs FCH Louisville’s family selection committee, said Mayes is the kind of person others love to support in The Fuller Center way of offering a hand up rather than a handout.

“Ms. Carolyn is a remarkable woman,” Patterson said. “When the work on her house got to the point of things she could do, she was there every day. Some days she was barely able to breathe. And every time there was a delay, she would just say, ‘That’s OK, God is good. He will provide. I’m a patient person.’”

Spirit of Love has been a key Fuller Center partner in the neighborhood, and Mayes has played a major role in taking that partnership to new heights.

“When other people come to work in the area, she makes sure Spirit of Love is open and has a clean bathroom and cup of coffee for them,” Patterson said. “She would provide meals for volunteers whether they were working on her house or someone else’s. She gives great hugs, and her gratefulness shows all over her.”

“It’s just the love, just the love of the Lord,” Mayes said of her “great hugs.” “What better way to show somebody love than by giving them a hug to tell them you love them?”

Mayes is happy not just for her new home but for the neighborhood that has been brought back to life through the work of The Fuller Center and its many partners and supporters.

A deeply spiritual woman, Mayes added that there’s another force at work in the neighborhood.

“It’s not just what we’re doing,” she said. “We’re doing this through our Lord Jesus Christ. He’s given us the strength to do these things.”

View this inspiring and informative video from the City of Louisville from the dedication.

Your donations to The Fuller Center for Housing help us make these success stories possible.