It was a tremendous morning as I awoke to the cool mountain air of Philipsburg, MT. I was the last one 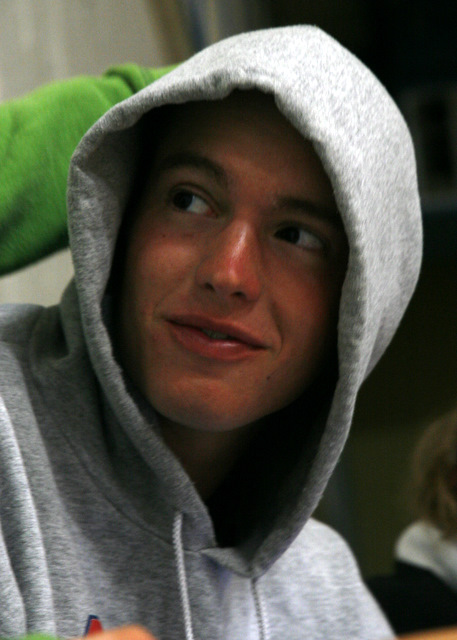 to leave the community church and the first one to get lost.  My adventure began while I was riding out of Philipsburg for 37 miles when I realized that the turn (Crackerville Rd) was at the 35 mile mark.  This came as a genuine surprise to me and the rest of the group, because I never get lost!  My instinctive reaction was to turn around; which I did!  I rode back about 4 miles looking for the turn.  However, after about 6 miles I found myself in a gas station buying a twinkie and a twix, because I needed a moment.  After asking for directions and the use of a phone (I decided to leave my phone in the van, because there was a chance of rain) I thanked the clerk, ate my twinkie and headed out!

My next stop was exit 216 on I-90.  As I exited the interstate I met up with a group of riders from Adventure Cycling.  As I rode with them I talked to a few of the riders, borrowed a phone, and had our pictures taken by their photographer!  I then reached mile 62 and noticed a nearby McDonalds  that was calling my name.  I pulled over and bought two apple pies for a dollar!  I ate one apple pie and saved the other for my reserve supply later.

My next dilemma came as the road I was on abruptly ended after crossing a railroad track.  On top of that, a train was passing through.  I rushed quickly and barely beat the train by 300 yards!  I then returned back to the McDonalds for some fries and to ask for directions.  I quickly found out that that was indeed the road to Butte, however the road veers off into a dirt path over a steep hill.  As I ventured to Butte the thunderstorm nearby also decided to take the dirt path.  The hail, rain and wind pounded on my bike as I climbed over the hill.  At one point a gust of wind shook my tire so much that I slipped and landed on the ground hard.  I unclipped and stood up, seeking shelter under a rock.  I met an Adventure Cyclist named Pete, who was also seeking shelter from the storm.  We talked a little bit about our rides and where we were going.  After a nice little chat the storm had passed and I was on my way again!

I followed the dirt road past Montana University.  Finally I arrived at Butte!  The excitement of being in a city overcame my tiredness, and my worry of being 18 miles behind the other riders.  I took in the scenes and even stopped in at another gas station for some wheaties, more directions and a phone to call the others and let them know where I was.

After about 30 minutes of riding around Butte I found Montana State Route 2.  Only 25 more miles until my destination of Whitehall!  Somehow my 85 mile trip would end up being a 103 mile adventure!  While I was riding up the final pass before Whitehall the thunderstorm from earlier came after me again!  I could keep up a fast enough pace to outrun it for a while, however once I started up the pass the rain started to fall.  Luckily during this ordeal my best friend Scott came by riding in the van, being driven by Lisa.  I gave them the hand on the helmet chicken wing signal (letting them know I needed help) and they came to the rescue!  I loaded up the bike and was on my way to Whitehall!  It was definitely a fun filled day, full of excitement and wrong turns!  …I guess the lesson I learned today was that even though times might be tough, remembering the hardships is the real adventure! … Also don’t give your whoppers to Scott, he’ll just eat them…