I’ve had that Chuck Berry opening lyric stuck in my head since I saw my Uncle Rocky Malone belt out some “Johnny B. Goode” on the guitar as the Missin’ Links rocked the Georgia Peach Festival last weekend. But it got me thinking about Louisiana. 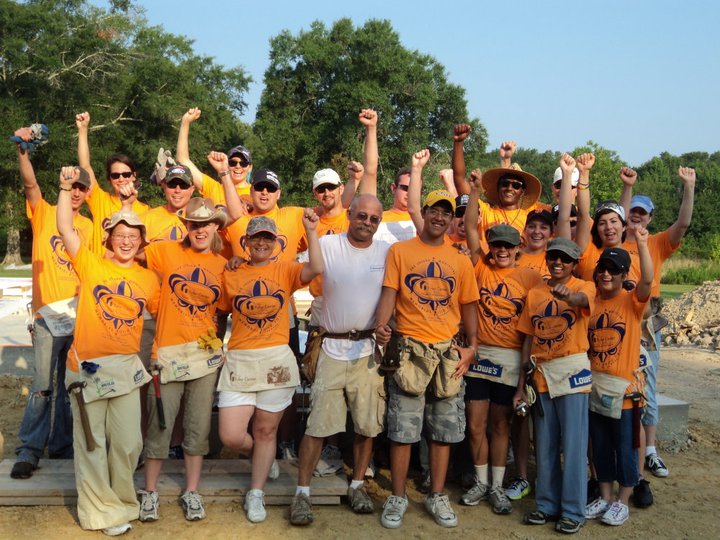 We’ve got some big things going on in that state. The Ginger Ford Northshore Fuller Center for Housing in Hammond, La., is in the midst of building its first house since merging with the 20-year Habitat for Humanity affiliate there. I chatted today with Tamara Danel, who leads the covenant partner there with her husband, David. Tamara says they’ve got a strong crew of volunteers, including a contingent of youth from Sacramento State University in California. They broke ground on the home June 5. “It’s very exciting seeing the community come together on this,” Tamara said.

Of course, the Millard Fuller Legacy Build needs volunteers for its October build in Minden, La., which is a true slice of small-town Americana. Click here to sign up for it. I’ll be there, and I promise you we’re gonna have some fun while helping to give families simple, decent places to live.

Oh, interesting but totally useless fact about Minden: It’s the site of Louisiana’s lowest-ever recorded temperature — TWICE. It hit minus-16 degrees in February of 1890 and 1899. But I doubt we’ll need earmuffs in October.

I also had a long conversation today with Louisiana native Beverly Black, our Director of Donor Development. She was relaying some information about HGTV’s Kimberly Lacy and a commitment from 3M to fund the construction of at least two homes during Lacy’s planned September trip to Haiti. You’ll can read more about that on our home page soon.

Beverly is human sunshine, with a smile that lights up a room and enough energy to make the Energizer bunny throw down its drum and give up. She and I also share a love of sports, jazz and having fun whether folks like it or not. We’re going to be working together a good bit, and we’re gonna have fun doing it. But with results.