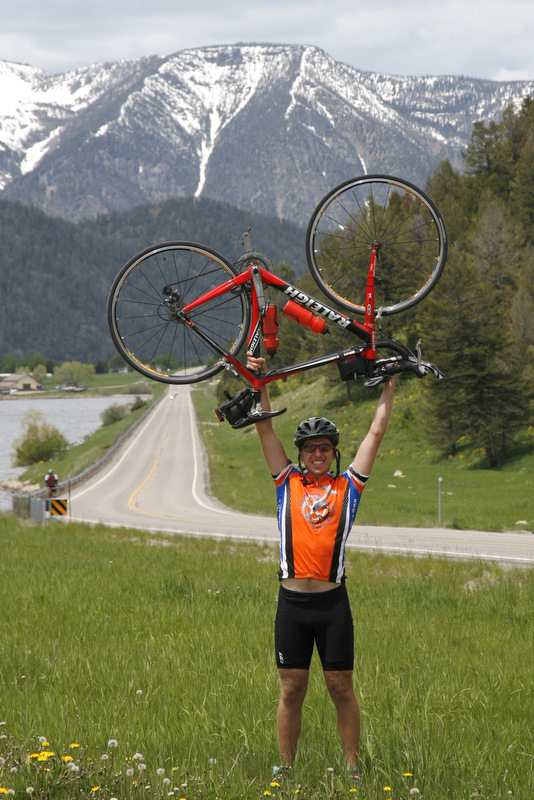 Today was epic! We climbed over Berthoud Pass. This pass has and elevation 11,307 feet. This is almost 2000 feet higher than any other pass we have climbed thus far. The ride began around 6:45 and the scenery was beautiful. The first 10 miles were rolling hills in the middle of a valley. There was a lake near our route and it was smooth as glass and we could see the reflection of the clouds off of its surface.

The next 10 miles of our ride followed the Colorado River. The road was carved into the sheer cliffs of the banks of the river valley. It was some of the most beautiful scenery we have seen all trip. Miles 20-40 were filled with more rolling hills. Miles 40-50 were the foothills of the nearing pass. The road had a slight incline of a couple percent grade. The whole time we could see the mountains in the distance just daring us to come and give our best shot. The real climb of 5-6% began around mile 50. We went up 4 switchbacks that were cut into the mountain. The grade was relentless with practically no flat portions to offer a little breather. Speaking of breathing, it got harder and harder with every bit of elevation.

The climbing got really hard for me around the 3rd switchback. I then discovered that I had a flat tire. I ended up taking a little breather as I fixed the flat. I was really lucky because just as I got the tire off the van that passed and I was able to get a real pump to inflate the tire. Looking back, getting that flat tire really saved me because it allowed me to catch my breath and get some food. After I got back on the road I felt much better and was able to go faster than before.

The pedaling went on and on and eventually I made it to the summit. I was so exhausted I couldn’t even smile and I had to support myself with my bike to walk. I walked over to the sign that had the elevation on it to get a picture. No sooner than a second after I got my picture taken it started to rain. A few seconds after that it was a torrential down pour with hail. The wind was blowing so strong that the hail was hitting us on the side and each one stung. We all ran into the bathrooms/ information center for protection.

About half of the FBA cyclists eventually made it to the shelter. Some were still on the climb and got soaked. We all hung out until the rain stopped and then some of us decided to try the descent. At first it was really cold and dangerous to go fast because the pavement was very wet. I ended up having to ride the brakes down most of the first few miles to stay at a safe speed.  Eventually we came to a place where the sun was shining and it felt so good to dry off a little. The sun eventually dried off the road enough where we could descend without braking. There was a stretch of road where I was consistently at 40mph for about 5 minutes. A little while after that I reached one of my trip goals, to reach 50 mph. My official top speed was 50.85 mph. It was so fast and amazing. I would love to do it again before I get out of the Rockies.
The last 6 miles were a dream. We were on this smooth blacktop road going downhill with a tailwind. I rarely had to pedal and was consistently above 20mph. To make it even better there were practically no cars to deal with.

Looking back at my flat tire today, I have to say that God works in mysterious ways. I hate getting flat tires but I definitely needed this one. I feel God knew I was really struggling and I needed a break sooner than later. When I am on my bike I don’t like stopping for anything, especially when I am on a climb. A flat tire is probably one of the only things that will get me to stop when I am motivated to finish a ride. I just need to remember that God has this master plan for my life that I don’t understand at the moment. He is way smarter than me and knows what I need exactly when I need it. Looking back, that was the best flat tire I’ve ever had.