By Anastasia Harbuck of the Eufala Tribune
Published: March 16, 2010

Eufaula resident Don May came to know his friend, Millard Fuller, when they were both young kids. May attended Valley High School while Fuller attended Lanett High School. The schools were fierce rivals, but that didn’t keep the boys from becoming close friends. 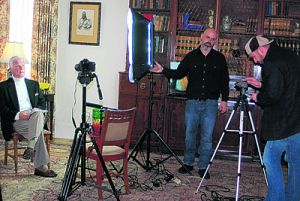 When they became men, they remained close friends. Fuller even sent May a copy of his book, “Building Materials for Life”, signed, “To my favorite catcher …” referring to how he and May played baseball together when they were teenagers.

Fuller grew up to become the founder of Habitat for Humanity and The Fuller Center for Housing, organizations that have built homes for thousands of people around the world.

“He made a lot of money,” said May. “And he gave it all away. What he did for (impoverished) people was incredible. He was a man of God.”

May was one of many people interviewed by documentary filmmakers Steve Zukerman and Chad Adair. Zukerman and Adair are making a movie called “One Moment.” The film tells the story of Fuller.

The filmmakers have traveled to places like Lanett, Americus, Montgomery, Charlotte, N.C.; Pennsylvania, Washington, D.C. and Louisiana to talk to folks who knew Fuller, who passed away approximately a year ago. Last week the filmmakers visited Eufaula to talk with May at Shorter Mansion.

Zukerman serves as the movie’s writer and director while Adair is the director of photography. Zukerman hails from Los Angeles, Adair from Asheville, N.C. “One Moment” is their second full-length feature documentary.

“Millard’s life is a testament to selflessness,” said Zukerman. “His is a story that needs to be told. We hope this (film) has a profound effect on anybody who sees it.”

Zukerman and Adair also visited Eufaula resident Irene Pyles during their trip to Eufaula. Fuller was Pyles’ first cousin. The two grew up together.

“He was like my brother,” said Pyles. She described Fuller as, “A leader. He always excelled at everything. He had an entrepreneur’s spirit. “It shocked us all when he gave his money away,” she said. “But he said he was raised to, ‘Seek ye the kingdom of God first’.”

Pyles recalled a time when Fuller came to her house wearing overalls. “Of course, I was amazed, because every other time I saw Millard, he was dressed to the hilt, driving a Lincoln Town Car. Daddy told him, ‘Millard, let me go to town and buy you a suit.’ And Millard said, ‘No sir.’ He had given up seeking wealth. “He had a real gift … he cared about the poor. And he loved everybody, no matter their color or where they came from.”

To learn more about the film, visit millardfullermovie.com.