This past weekend in McDonough, Ga., the Henry County Fuller Center for Housing, which will host the U.S. portion of the 2012 Millard Fuller Legacy Build in September, held a spaghetti dinner that served as both a fundraiser and an awareness event to promote their past, current and future work.

Henry County FCH President Shane Persaud was fortunate enough to land a special guest for the event, a woman whose life of service has literally changed the lives of millions of people — Linda Fuller Degelmann.

Of course, it’s easy to forget that Linda has done so much for people around the world because she’s so darn down to Earth. But one thing I’ve noticed about our co-founder is that something a lot of people say about her is not true. She does not treat everyone equally.

Allow me to explain: Linda has rubbed shoulders with celebrities and heads of state. She’s met famous folks left and right and treats them as if they’re just normal folks. She’s not awed by others’ power and fame. After all, she’s pretty famous and she sees herself as just a normal person.

However, I’ve noticed that, on the other hand, Linda does give homeowner partners star treatment. It’s not some calculated effort on her part, and I suspect she hasn’t noticed it herself. But nothing seems to touch Linda more than having relationships with volunteers, supporters and, more than anything, homeowner partners (who often become supporters and volunteers themselves). They are the “stars” to Linda. 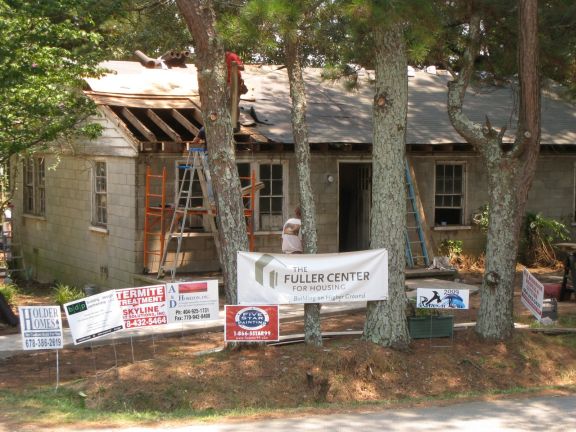 She beams when talking about children who’ve grown up in homes built as a result of her and Millard Fuller’s decades-long dedication to the cause of eradicating poverty housing around the world. The hugs, laughter and smiles she shares with Fuller Center homeowners are genuine. She is our homeowner partners’ strongest advocate.

Every relationship she forms with homeowner partners is precious to her, but one especially so. And that is with Lillie Miller of McDonough, Ga. Linda worked on her home, along with more than a dozen others, in June of 2009. It was a project of the Greater Atlanta Fuller Center that would help give birth to the Henry County Fuller Center.

But it wasn’t the mere fact that Ms. Miller’s home was the one of 17 houses worked on that was in most dire need of repair with just about the only part left standing being its concrete walls. It wasn’t the rotted floors, moldy walls and ruined furniture. They also bonded because they had both recently been widowed. It was a bond that was especially evident Saturday in McDonough at the spaghetti dinner held at Wesley Way United Methodist Church, where they reunited. 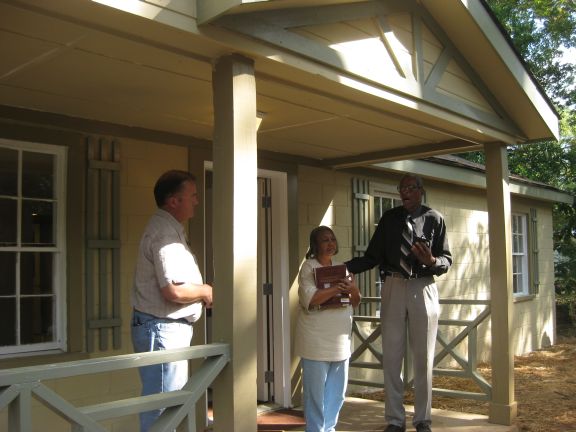 It’s been nearly three years since the two women worked together, along with dozens of others who helped on Ms. Miller’s home and others in the Lemon Place neighborhood, near where other homes will be worked on during the 2012 Legacy Build. Ms. Linda has found happiness with new husband Paul Degelmann, who also knew the pain of having lost a long-time spouse. And Ms. Miller is happy in her new home.

“It was such a joy to be with Ms. Miller after nearly three years on Saturday evening,” Linda told me. “When you see the before, during and after contrasts as work progressed on her home, it is easy to see why she looks so well and happy. She is an inspiration to others in Henry County who own and live in undesirable housing but do not have enough income for even just the basic improvements that are needed. Some of those homes are already targeted and will be transformed during the Millard Fuller Legacy Build.”

There will indeed be many more before-and-after success stories like Ms. Miller’s as a result of this year’s Legacy Build. And, just as importantly, there will be bonds formed like that between Linda and Ms. Miller.

You, too, can forge such relationships and lifetime bonds. But only if you join us! Come to Henry County Sept. 9-14 and meet Linda, Ms. Miller, Shane Persaud and scores of others who are changing lives.

Read past stories about the work on Ms. Miller’s home here and the dedication here.

READ MORE ABOUT THE AMAZING LIFE OF LINDA FULLER DEGELMANN.