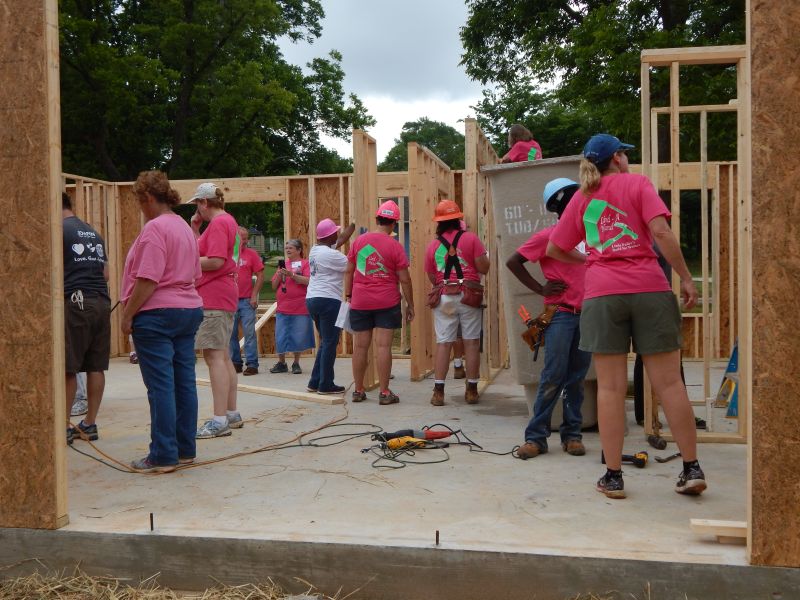 If there was a theme to the first day of the inaugural Lind-A Hand Build, it wasn’t that it was mostly women volunteers doing the work and mostly women leading the charge. Nor was it the heat and humidity. No, the theme for the first day of Linda Fuller’s Build for Women could be summed up in just three words — ahead of schedule.

By 2 p.m. Monday, trusses were being hoisted at a rapid pace, and the home for Jetorrie Johnson and her 7-year-old son Matthew was fast taking shape.

“It’s amazing, really overwhelming,” Johnson said after being pulled away from the work site to chat for a moment before going right back to work alongside the other women. “I feel better than blessed because everybody could have been doing something else with their time other than coming to help me.”

“I think we’re far ahead of schedule on the first day of this build because we have some incredibly skilled women that have been doing these builds, working with women volunteers for years — and also the house leader, Mary Lou,” Linda Fuller said. “They know what they’re doing, they’re able to give directions very well, and most of all there’s just a great spirit of camaraderie and eagerness to get this house built.

“The covenant partner here has done such wonderful preparation for this build,” she added. “They had everything totally prepped. They have just done a magnificent job getting us ready, and that’s another of the main reasons we’re ahead right now.”

Dianne Fuller, leader of The Fuller Center for Housing of Macon, is a veteran of many blitz builds and was impressed with the start to the week.

“Everything’s well-planned and just going according to schedule — in fact, we’re ahead of schedule,” she said. “It makes me think that this build is going so well that maybe the world ought to be run by women,” she added with a smile.

One of the veteran construction leaders on site, Irene Kagika, praised the volunteers for their patience and hard work.

“They’re very enthusiastic and loving what they’re doing,” said Kagika, a resident of Atlanta and native of Kenya. “So far we’re making great progress. I think we’ve had a great start and I think at this pace we’ll be done and ready for dedication on Friday.”

Click here for a photo gallery from day one of the build.