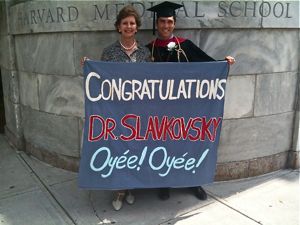 Fuller Center co-founder Linda Fuller is in Boston to celebrate the graduation of Judah Slavkovsky from Harvard Medical School and the witness that he is to the success that can come from having a decent place to live.

Judah grew up in a Habitat for Humanity house. His family was the first to partner with the Habitat affiliate in Sisters, Oregon.

"When I was 10 my family moved into this new house and I remember planting apple trees in the front yard with both of my sisters. We left behind a house where in the winter time ice would build up on the insides of the windows and where mold would grow on the walls," Judah said when he spoke at the memorial celebration held for Millard Fuller in 2009. "Having a well-built home is transformative and for me it was enabling. When there is stability in housing there is stability in communities."

You can view Judah’s entire speech from the celebration service here.

Millard and Linda Fuller, who founded Habitat for Humanity in addition to The Fuller Center for Housing, grew to know Judah and the Slavkovsky family when Millard gave the commencement address at Judah’s undergraduate ceremony.

Judah made such an impact on Millard that he mentioned the student in his book "Building Materials for Life: III."  He wrote:

"[Judah] advanced across the stage, received his diploma, shook hands with the president, but, instead of going back to his seat as all the others had done, he walked straight to me. He extended his hand. I shook it as he said quietly and firmly, ‘Thank you for the house.’ …I was deeply moved. It was such a magical moment and a powerful statement. A little Habitat kid expressing what a simple thing had meant to him–a house!"

"Families who have experienced poverty, who understand deeply the meaning of this word, are freed to engage more deeply in their communities and to build them up. It is possible to rise above the struggle to get ahead, and instead engage in the struggle for justice," Judah said.

Judah says he wants to serve the poor as a doctor, positively impacting world health.  "I look forward to the day when all God’s children will be free in the possession of a quality home and with access to high quality health care," Judah said.

You can congratulate Judah by posting a message in the Guestbook.

View the video below of Judah on graduation day!

Find other heartwarming stories on our Success Stories page.